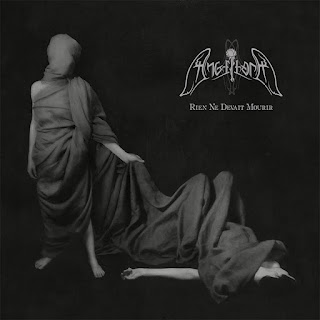 France is more of a black metal country than a doom country, but given their romantic notions I am certainly open to doom coming from them . This French band finds them selves falling somewhere between what would be gothic doom and funeral doom in the pacing of their songs. With a very Theater of Tragedy like dynamic between the female vocals and the death metal growls. The first song is 20 minutes which is a lot. The epic soaring guitar to "Dreams" which works with the symphonic string arrangement gives things an almost black metal sound.

"Drowned Divine" takes on a more somber tone. I enjoy the mood created , but there is not much to hook me into these songs and invest my attention into them .It does however provide a suited soundtrack as background music to write to . A couple minutes in the guitars and drums kick in more to make the song move. Thanks to the very morose male vocals that come in a My Dying Bride like feel is created. I do not think they are as dark or melancholy as My Dying Bride. Speaking of My Dying Bride they are a band that has manny sides just as this band shows us another side on the song " Blood For Lavina". It is not a doom song at all , but a mid tempo goth rock song. Which I am fine with.

Then they get really dramatic and go into a Manheim Steamroller symphonic song. Piano does most of the work, the guitars tease like they are coming in but don't . They stick to the symphonic approach for the last song , but with more dark wave like vocals . Guitar is also more present. As the song progresses it feels a little more Nightwish like than what we got from them earlier in the album. I will give this album an 8.5, I like what they do , not sure it is something I will get a lot of play from but if you want a more symphonic side of doom give these guys a shot.