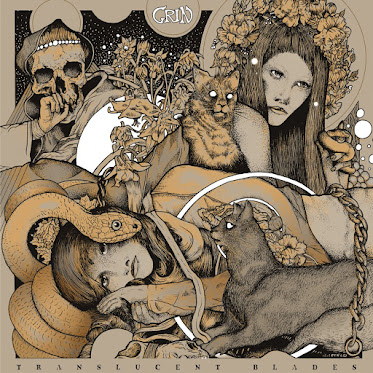 This German duo consists of a duo of a chick playing bass and a drummer. They kick up a pretty big sound for such. The both sing or vocalize in some manner.  The first song might have amore feral intensity to it that makes it heavier , but I appreciate the more Jesu like tones of "Orbital Grace". It is just more song focused. The same could be said about the title track that follows , though it does allow for more weirdness. Particularly in the more conventional chant of the echoing vocals  There is more a droning psych feel to "Husk". The vocals need to do more hear as it is kind of more of a sound than a song.

The type of sonic pounding they provide on "Electric Eye" is more typical of what you might expect from bass and drum. The vocals are heavily effect and do not really provide a focal point to the song. The chant of the weird vocals gives some form and focus to the other wise rumbling jam going on below them. "Holy Grief" is more sludge powered, It feels more in line with a band like Kylesa. The sung vocals work with the groove rumbling along with it that still gives the song to breathe. It is a song that grew on me with additional listens. There is a proggy hippie vibe to "Antares" which is the only song that is on the mellower side.

They get back to heavy with the last song. It sounds more like a bass on this song, but it works for where the yare going with it. The vocals are spoke with some grit and growls are panned in the background. The vocals fall some where between Lemmy and Tom Warrior. There is an "Orgasmatron" grinding  to the song. It drones along without progressing much beyond that point.  I will give this album a 8. It was fun listen, you might be into it more than I wise.