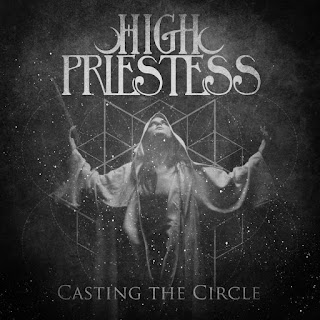 Remember ten years ago when the sub genre 'occult rock' was on the rise. Ghost is arguably the biggest band to come from that scene. Many were female fronted like Christian Mistress and The Devil's Blood, though none of them really broke big after their moment. The pendulum swings back around and with the rise of Instagram witches perhaps the time is right.  The title track that opens the album is more exotic. I love it when people make their guitars sound more like sitars , yet you can still tell it is a guitar they playing. So he first song is more influence by Ravi Shakar than Black Sabbath.

We do not hear the more traditional strains of doom come in until the second song. It is dark enough to keep me happy so that says something.  There is more of a dark retro rock feel to " the Hours" . Much like the previous song they keep the overall retro feel in place. It has a slithering groove . Though it does not slither as much as the  17 minute "Invocation"  which jams  around the Hungarian minor scale. I love the Hungarian minor scale. 17 minutes is a lot. They do take you through a journey where that scale is played in varying degrees of heaviness There is great guitar playing through out the song.

The album ends with the three and a half minute "Ave Satanas" . This is yet another song with Satanic theme. My gut tells me they are not actually Satanists, as it is dark but not sinister, and that is something you can not really fake unless you are Slayer. It is more of an outro than an actual song. It is pretty much just an atmospheric vocal piece. I will give this album an 8, I loved the guitars , but the vocals bored me.