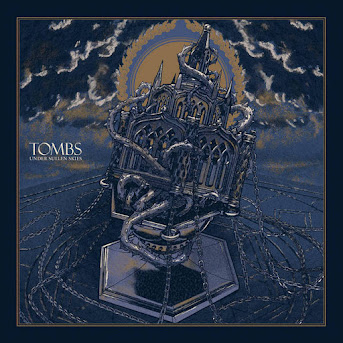 Regular readers should  know how I feel about this band. This is the band's 5th full length .  It finds Mike Hill  flanked by the same line up that played on the "Monarchy of Shadows" EP . There is a more Dissection like deliberation to the the steady galloping feel of the opening track. There are so many sounds this band delves while retaining a unified vision. There is more overt metal chugging to "Void Constellation" . The guitarist from  Six Feet Under plays a solo on "Barren" which is otherwise a typical black metal before taking a shift into gloom after the solo. "Hunger" pretty impressive it might be my favorite song so far. Dwid from Integrity contributes vocals on what would be the chorus and sounds just like Lemmy when he does.

They dig into death rock with a very committed fervor that can be felt by the crushing waves of darkness they summon with 'Secrets of the Black". Sera Timms from Ides of Gemini contributes ghostly backing vocals that add an even more eerie texture before they come crashing in with a more doom tinged take on black metal.  "Descensum" finds them hang on doomy chords with double bass flowing under it until it kicks into black metal. There is both dissonance and a low creepy vocal to keep it from the realm of your average blasty mcnasty.  "We Move Like Phantoms " has a cool staccato groove to it. Then you can hear hard core influence on "Mordum". The vocal delivery is very metal. The chug it carries is pretty powerful .

"Rex Talionis" has great lyrics. Shaking your fist at the empty sky while waiting for the end, is certainly fitting for todays climate. This might be the doomiest album I am filing under black metal this year. Witch / actress Kat Cabral does spoken word leading into the simmering blackness that is "Angel of Darkness" . "Sombre Ruin" conjures an even more crushing darkness than the one they gave us on "Secrets of the Black". It drones on the ritualistic pound. "The Plague Years " ends the album with a triumphant thrash feel. I will give this album a 9.5 . It is a wonderful success and works when compared to their already impressive body of work.