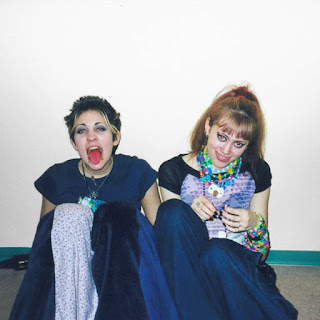 There is a more 80s new wave touch this time around. The vocals are breathy baritone croon not unlike Jesus and the Mary Chain. The mood is lighter than the Mary Chain gang. Yet darker than the kind of Crowded House pop that dominated the radio during the time this sound pays homage to. They nailed the sound for sure, now lets see what they do with the songs. The second song has little but more of a Cure like drive to to. I like better than the first song. The 80s college pop runs even deeper in the breathy vocals of  "Matty Rue" that features the vocals of Adam Klopp from Choir Boy. They dip into shoegaze on "Floodgate" which finds Tamyrn lending her voice. There is also a slight Smiths  like atmosphere to how the vocals hover.. Which considering they are one of my favorite bands makes this a huge compliment.

Where atmosphere worked on the previous song , it  causes "Crmey" to blow away in the breeze. There is more balls to the tension of "Pretty Face"? The synths are still pretty thick in the mix, but the song works more often than not. "Ducky" has a little more of a dancey feel to it thought the vocals back off and mutter in hushed tone just over the bass line that holds the song together. "Inverness' finds us back to a more brooding blend of new wave. The bass line once again is the back bone of the song holding it together for them to dream their melodies around. It is a little more Modern English in it's intent.

"Oil Burner' is another more shoegazing song. Perhaps they are not as skilled at this sound as Nothing, but it works with what is going on here and appreciate the sonic nature of it. The last song is kind of an emo ballad/along the lines of what you might expect from early Foo Fighters. Certainly  veers in a different direction from the rest of the album. I will give this album a 9, it sounds great and the songs are strong. Not sure how much I will listen to it given the fact I already listen to the bands it is drawing influence from.