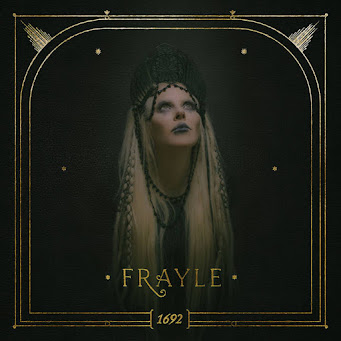 The first track show promise, but it s just an intro, though they fulfill that promise with the first actual song. The light almost sugary sound of Gwyn Strang's vocals is a contrast to the brooding style doom that lumbers behind her. It reminds me of Jucifer. But more metal where Jucifer would just hammer along the fuzzed out drone. Jucifer actually has an album coming out this month, since I was wondering what the hell happened to them . The drummer lays into things more on "God Of No Faith" . More forceful males vocals come in as well. These vocals are not credited to any member of the band. In the world of possibilities it could be a woman's voice but not likely.

The pace picks up into more of a chug going into "Darker Than Black" . While I like the contrast I am suspecting that Strang is a one trick pony, as I would like to hear her belt it out in order to provide more dynamics, as this sing song whisper is going to have gotten old by the next song. This is correct as "Dead Inside " floats past me in the background. More often it is about where her voice sits than the unchanging voice with which these melodies sit. She sings more on "Burn" a song so well written that her uniform vocal approach goes un noticed. Not to mention it feels like she is trying more on the chorus. There is a nice ominous pulse to " Godless" . The rule here is cool riffs alone do not a good song make. So it hangs in the balance of her changing the cadence of her voice to accommodate the song rather then the song accommodating her.

"If You Stay" has more of a grunge like feel to it. It is rare that I would find a song that carries more of a drone to it more interesting , but that is how I feel about "Stab" .  I will round this down to an 8.5 , so it hovers just under what consider top 10 territory, though it on a tier above most of it's peers, I think the vocals play in their favor or against them depending on the song, but obviously by such a high socre it works much more than not.