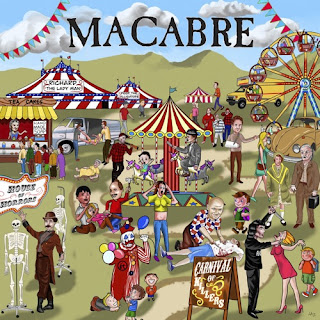 It should come as no surprise to anyone that I am into serial killers. I am familiar with this bands work though finding their album is not the easiest. They are not straight ahead death metal. There is a more spastic grind core hint to their songs. They seem more technical on this album than the rawer version of the band I heard in the past. They have been at it since 1984, so know what they are doing by now. The second song is more deliberate in pacing. The vocals are more sung than snarled or growled. They have a very Mr Bungle like fluidity to the way the song shifts. Their drummer is fucking as insane as the killer they sing about.

"Stinky" goes off the rails. It gets too crazy with nothing to really connect to except the crazy. "Tea Cakes" feels more grounded . I am not sure if I would call it catchy, but it gives you more to hold onto like a fat chick. " Them Dry Bones" is a doo-woop tribute to Dr. Holmes/ I had high hopes for " Richard Speck Grew Big Breasts". But it is all over the place. They do pull it together for the chorus, but it touches on the more punk side of metal. Thus the grindcore connection. There is a similar disjointed jerking of the fun house ride on "Slaughter House"

The drumming is insane on "the Lake of Fire" . As a  song it hammers forward in a very straight forward manner. More coherent than some, this however makes it less experimental. It really depends o what you want from these bands . The song does have enough teeth. "Warte Warte " is too German for it's own good. It is also too punk. They thrash out on the Timothy Mcveigh anthem "Now It's Time to Pay". They tend to like using kids song more on this album perhaps , the wheels on the bus part of the Ted Bundy themed "Bug" is another too punk moment. They get more metal for "Corpse Violator" . I want more of what they are doing here. The last song is a straight ahead thrashing blast with some circus thrown in.  I will give this album an 8. The vocals are improved and production is cleaner , but I want harder and darker from these guys.