Hatebreed " Weight Of the False Self" 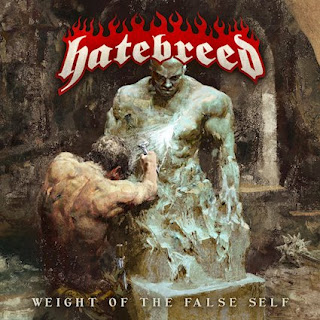 From playing in hardcore bands I have been exposed to these guys , and Jamie Jasta is a big metal head who gets around, so more than familiar , but never spent a great deal of time with their albums. From what I am hearing here, it sounds like there is les Slayer influence here and more of a return to their hard core sound. Granted very based hard core at that. We got tough guy break downs and plenty of gang vocals . Jasta barks out the self help hard core lyrics. The guitars are however produced more like a metal record. They are pros at killers that is not called into question .I think where we might find the sticking point for me is in the vocals which are so far a one trick pony.

I like the chorus, but the lyrics go almost over board on the motivational speeches. I do not want anything positive in hard core. I do not want the world to be made better I want to burned down. But there are some decent hooks in this song. " Cling to Life" does not make much of an impression , but the more metallic " A Stroke of Red" is the best song so far.  Jasta comes closer to singing on the chorus of " Dig Your Way Out". The verses are blazing fast and do not do as much for me. The riffing is more aggressive in the drive of " This I Earned" . For some reason I am beginning to get Slipknot vibes at this point the album. "Wings of the Vulture" is pretty par for the course with little in the way of surprises when it comes to these guys . The drummer how ever proves he is fucking crazy.

It sounds like he is quoting bible verses on "the Herd Will Scatter" .  'From Gold to Gray" is pretty much color by numbers for this sort of thing. The guitars are more melodic going into "Invoking Dominance" closes the album. I will give these guys an 8.5. Yeah it is mass marketed hard core for the same demographic that listens to Slipknot, but these guys have been doing it for some time so they are good at what they do. Out on Nuclear Blast.