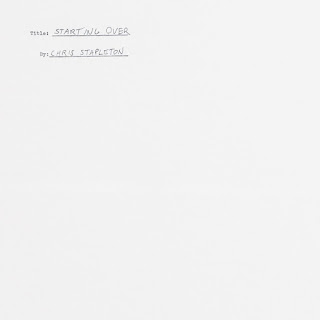 One of the may half dozen newer country singers I like . He is at the top of the heap when it comes to talent.  He is a little more optimistic and upbeat than I normally like to hear from him, but it might grow on me. He plugs in and gets into a more blues based southern rock for " Devil Always Makes Me Think Twice". He belts it out and puts grit into it when he gets midway into the song and then we are back to what I want from him. You really get to hear the emotional intensity he sings with in the soulful "Cold" ." When I'm With You" is a traditional country ballad. He kicks into a more rock brand of Country on " "Arkansas" . Lyrically it has a touch of outlaw country to it.

The album begin to take a more folkish turn with " Joy of My Life" and even "Hillbilly Blood" which despite it's lyrics doesn''t not have as much twang to it as you might suspect. I am happy any time he is belting it out and the latter is fairly dynamic. "Maggie's Song" is about his dog. It's a folk ditty that is fine for what it is , not as compelling as some songs on this album. Keeping in the tradition of having his best song based on drinking "Whiskey Sunrise" upholds this. His singing is soulful but more straight forward with less in the way of vocal acrobatics.

"Worry B Gone" is straight up honky tonk rock n roll . It good for what it is not among my favorite songs. From a song writing perspective there is a more honest feeling to the slower "Old Friends' . "Watch You Burn" is about the shooting at the Route 91 Fest in 2017 . The song has a lot of swagger. The crescendo of the song has a gospel choir. "You Should Probably Leave" would not be out of place on a Bonnie Raitt album. The album closes with " Nashville TN" Which is a return to the old country sound. I will give this album a 9.5, while I am sure he stands head and shoulders above most artists on country radio I do not feel he is really going as above and beyond vocally as he has on previous albums.