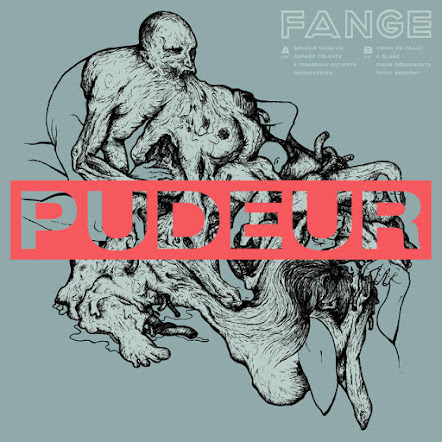 This band from France is fucking cool. This album came out back in April. They are more blackened sludge than doom, at least on the first song. They are nasty and relentless. Heavy in the same way Hexis is.  They do slow down half way into the first song , with something that is gloomier but more sonically vicious than most doom. The second song hammers at you. There is a hard core anger . The atmosphere is bizarre as it haunted the other wise hyper aggressive attack. Industrial is also an influence. Not uncommon in sludge. The third song is more like an industrial noise interlude as it is recorded in such an opaque fashion I am not sure how it could be a song.

The song that follows this noisy interlude is still intense but after what happened before it this is a breather. It is like an industrial song set against death doom. The chanted gang vocal chorus gives it a more memorable hook. These fuckers are all over the place. This is much more deliberate and less chaotic for sure. They continue to abuse your ear with some of the densest death doom you will hear. The vocals go into more of a Today is the Day place. It is really dark so I am here for it. It is like a doomy take on hard core when they hit "Croix de Paille" . It does speed up in a more blackened direction . "A Blanc" has a more death metal feel to it's stomp. It is rough around the edges , but generally interesting , how ever not as tightly written as the previous songs.

They go into another robots on meth industrial interlude. The vocals are spoken and not focused in the way some one like Author & Punisher would approach it. It is harsher. When it gets to the last song I begin to realize one of the things I like about this band is they remind me of Angkor Wat , but if Angkor Wat as a sludge band not a thrash band. I will give this album a 9.5 , color me a fan. It's very heavy and harsh. but still focused on songs , when they are really trying to play them and not batter you ear drums with robo torture.