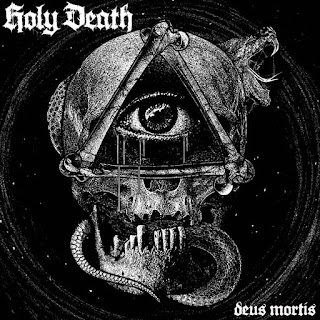 The first track is really just feed back and droning drums so we will write it off as an intro. Yes this is more doom than some of the sludge bands we have covered this month, but they also have an Entombed fixation. Going as far to to cover "Wolverine Blues" . The first song is more deliberate than Entombed so lends it's self more toward doom. More though not full fledged so do not go and throw away your Electric Wizard album's just yet. The vocal are a low gruff bark very much in the vein of Entombed. This is also not uncommon for sludge bands. I will say it once and I will say it again, sludge is doom for punks. The raw nature of what is going down here weighs in favor of this verdict.

The title track is gloomier so leans more in a doom direction. The drums sit back in the mix as the guitars dominate here. The vocals bark in a manner , a little more aggressively than they did on the first song. Their guitar tone is mean as fuck. They might be all some of you need to sell you on this. They are very effective at being heavy as fuck. Since the last song is that Entombed cover, I am going to need the song after this to prove to me their merits as song writers. They have gotten by with just being heavy and having a great guitar tone thus far. So better than just narrowly edging out the cool riffs alone does not a good song make rule. Lots of bands do not make that cut so that is something.

This make or break song is more doomy. It lumbers on a more droning riff, almost like a death metal band covering Black Sabbath. In all fairness these guys might be more death doom than they are sludge. The focus is firmly on the chug. Dynamics are not their bread and butter, hitting you with the mammoth weight of their riffs is. To their credit they chose the song "Wolverine Blues" rather than "Full of Hell" so the second most popular song on that album. I think covering a song by a band you are obviously influenced by is kinda pointing  the finger back at yourself. I will give this album a 8.5, they got by on heaviness and tone alone, so it can work , you just gotta do it right and these guys did.