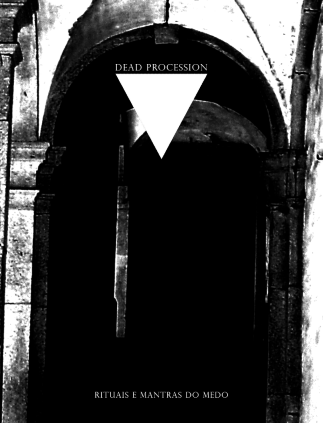 Here is another band from Portugal , what is up out there, you guys are killing it with the metal. Though calling this project metal might be an exaggeration. The first thing that struck me about these guys is how lo-fi this is. It sounds like it could have been recording while they were holding a ritual in their basement. While production wise this is demo quality it works for what is going on here. A monotone chant in the background with the drums way up front. The bulk of what is going on here is ambient drone with minimalist doom drumming.  On the second song the vocals are  sung more than  they are chanted. The drums fake you out making you think they are going to build into something that never comes.

With the third song "Spiritual Osmosis" the first hints of distortion creep in, but rather than being used in a metallic fashion it creates noisy ambiance. The vocals and the guitar lock back into more of a drone as the chanting takes you back into the ritual chamber. It's not until "In the Labyrinth" that the distortions congeals into something that sounds like chords ringing out from a guitar. The vocals are more sung on this one , but they are also more buried behind the guitar. I think the first cymbal I have heard makes a crash during one of the pounding accents. It almost sounds like they are going to go into an actual doom groove. At ten minutes is this a little excessive...yes.

The last song "In the Bottom of the Dark Lakes" doesn't find the drums breaking any new ground. It doesn't even sound like they are playing a whole kit.It gets more sparse until it is just the drumming and the pulse of some kind of electronic instrument. Even as minimal and droning as this album is, it's way better than Sunno))) last piece of noise. The first few songs are the strongest, though most of them simmer around the same mood, the atmosphere is dark and genuine enough for me to give this a 7 despite the fact the doom elements are way more of my thing than minimalist noise. The album drops March 1t.