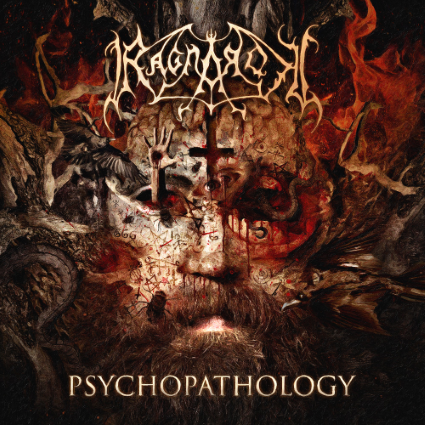 Their 8th full length finds Jontho stepping out from behind, the drums to front the band. If you want the job done right then you gotta do it your self. The album has a fuller sound than some of their previous efforts. Hailing from the first wave of 90s Norwegian black metal, Jontho has also played in Tsjuder and the band has even seen Hoest from Taake pass through the ranks. It opens with a speedy powerhouse of a song that has not shortage of blast beats , but shows you the band is no limited to them.The punches they pack into their songs have more in common with thrash."I Hate" finds the blast beats being indulged in almost to access, but they play off many of the black metal conventions bands like Mayhem use like the creepy chord slow down with a side of double bass. By the time they get to the title track which is the third song, some of their speed obsessed attack begins to become a blur, even though the chorus stands out more than the first two. You can't say all the songs sound the same even though most share the same tempo as the guitar is varied and well played the is more attention to detail in this regard on "My Creator". The vocals which are a mid range rasp follow similar patterns, sometimes giving the illusion of  uniformity.

The guitar joins in a creating a more monochrome sonic painting on "Infernal Majesty" as the riffs are very similar until you get to the chorus. Midway in there is a slowed section, but even when they shift into this dynamic they do much like they already have. "Heretic" switches up enough with the slower riff coming out of the chorus  at one point and the almost Emperor like moments that have more elegance to them.The chorus where he croaks heretic is not as interesting as some of the previous choruses on this album, but the put more thought else where in the song so it balances out. There is more of a tangible difference in the riffs of "Into the Abyss". The approach to the chorus reminds me of something Morbid Angel might do back in the "Altars of Madness" days though it's screamed higher than a David Vincent growl. The speed thing while it's partially obligatory for the genre I think when they chug with more authority on "the Eight of the Seven Plagues" it's a more powerful statement, however don't think about that song title for too long or you'll get a brain freeze.

There is enough melody in the bridge riff of "Lies" to make it more than a blast fest, though that is the direction the song leans in, and once again when they chug becomes more focused and steps out of the hail storm of blast beats it's more effective. While slower at this point their overall sound, which at some point goes back to the blast begins wearing on me. It is well executed and this album is well produced, I need a little more variation than filler like "Blood". To their credit the lyrics are intelligible throughout the album and the closing song "Where Dreams Go to Die" bear a more Dissection like melody. Overall I'll give this one a 7.5, well done but could stand to be more varied.