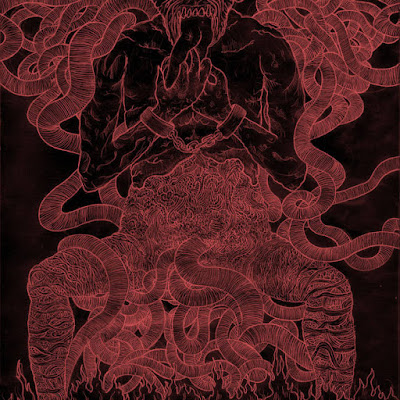 Progressive black metal album that doesn't want to be Deathspell Omega. It's progressive in its chaos. Aevangelist is a better reference point for the blackness being explored here. the opening track  does more to test the boundaries of dynamics than the second which doesn't really grab me until it breaks down three minutes in. There is a very cavernous sound to this recording , but tonally things do not suffer because of it. The vocals are tormented death metal roars that sound like some one is losing there mind. While the patterns these growls are unleashed in are some what random  it's effective in the first few songs, by the third song I am ready for something a little different. The chaos begins to come across more like noise jamming and less like songs at this point.These jams are well played. The sonic density being tested here is impressive. The guitars sound like they are swarms of bees buzzing up from hell. Jagged, angular and abrasive would be the right words to sum the guitar playing up with. At least it refuses to conform to the tremolo picked riffs most black metal bands conform to.

The bass that opens the fourth song helps to change things up and provide the dynamics this album begins to need at that juncture. Slowing down the ominous darkness and cleaner vocal tone sets the stage for a more moaned vocal rasp that gives these guys more of a dsbm feel. The production is very occult death metal as well. When it does build into the blast beat section there is an eeire melody played against it to balance it out. When the fifth song descends into the more abstract collision of disjointed ambiance they hit a thing of beauty and then slap you back awake with a screaming blast. The vocals don't have much purpose here but to add to the chaos. It ends with a song that dies down into a more melodic and atmospheric section without compromising the dark and intense nature of this album.

I'll give this album an 8. It's a solid effort and an improvement in the atmosphere this project proves it self capable of constructing. At times there is a more uniform nature to their sound, but overall they keep things varied enough to elements like the haphazard vocal approach are swept aside with the storm of chaos that lures you into it's darkness.