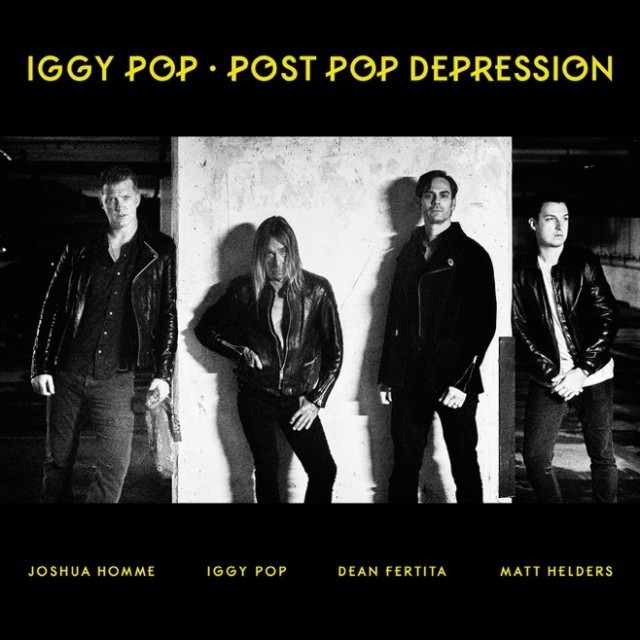 He is the last man standing from a by gone era of Punk. For me losing Iggy would be a bigger blow than Lemmy. I got a ton of play out of both the Stooges and Motorhead in the 8th grade, but started listening to Iggy first and as this album shows, Pop still has it in him while the last Motorhead album, saw Lemmy already waning. Iggy sounds better than he has in sometime. I'm sure Homme's sense of production, doesn't hurt. The first song sounds like you would expect from Iggy Pop, playing with Queens of the Stoneage. While I disliked Queens of the Stoneage's last album, this coupling has injected new life into Pop. His croon is more careful and Josh's backing vocals work well with his voice. Iggy sounds almost as good as he did on "Blah Blah Blah".

"Gardenia" has a new wave pogo to it's groove. The slink of " American Valhalla" is well carried in it's bass line, but as a song it wanders around like it's too high in some of the bridges. This trait has also characterized some of the most recent QOTSA albums. The Arctic Monkey's drummer Matt Helder's taps more than really lays into his kit, which might be appropriate for the songs in their current state, but I can't help but think "In the Lobby: might have more punch if he hit harder.The star of the album is bassist Dean Fertita, from Queens and Dead Weather, who is a groove monster. "Sunday" doesn't have a groove that is focused as the previous songs and sounds like they gliding along on some Stones influenced indie rock. Pop's lyrics are back in their clever form here. You can still hear Bowie's influence on him, as this barrows from the "Scary Monsters" album.

Pop comes closer to the mic with the stripped down " Vulture" . This album finds Pop closer to what I expected out of hims though there is  darker and more textured instrumentation that reminds me of Wovenhand. There is a more Led Zeppelin like strut to the opening of "German Days" that drops down into something almost gothy with Pop is crooning in his lower register.The angular guitar works well in the middle of the song and it has some of the album's best riffs. They relax into lounge lizard disco on 'Chocolate Drops". This is not the first sound you expect to hear on an Iggy album, but it works so I have complaints. He has touched on so many genres throughout his career nothing should be a surprise at this point. Not as soulful as something from "Young Americans" , but this would not have worked on a Stooges album.

There is also some soul to the vocal harmonies  that open "Paraguay" which closes the album out. Then it morphs into the verses that much more straight forward. Then the song returns to a heavier version of the melody the song began with as Pop narrates over this . There could be a little more pay off from this build and over all the album could stand to rock out a little more. However it exceeded my expectations by far and sees Pop returning to back to almost a more new wave sound, which considering "Raw Power" isn't being re-created anytime soon, works for me and I'll give it a 9 and see how the more indie rock elements grow on me.