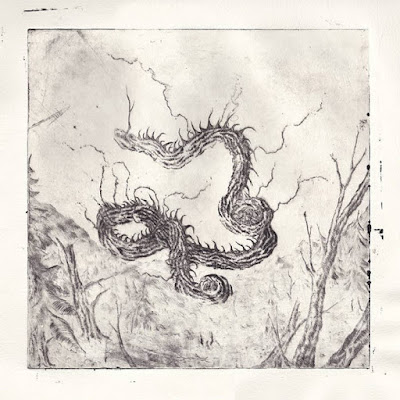 Here is a another argument against the more politically correct notion that geographically all black metal is created equally, as this is another band out of the Northern European region that kills it due to the ice running through their veins. The coldness resonates differently than most black metal , but it is there.  This Icelandic black metal bands comes out of the gate blasting with a feral snarl. There is a punk like  sneer to some of the undertones. Sure they are spastic, but the flailing is pretty heart felt and convincing. There is a more majestic metal feel to "Sal". The guitar are raw, but well layered. This album has an interesting production quality that should please the grimmest among us, but is still easy to listen to and doesn't impede the melodic qualities. This album is not fucking around. They do hit the brakes on the third song which is a sprawling fourteen minutes and wallow in a slower more miserable existent that owes more to depressive black metal than the rawer savagery they hit you with at first. The vocals wretchedly spew forth, sometimes dipping into a lower growl. They vary the intensity of their blast beats not always throwing themselves into them with such reckless abandon.

They go into an even faster pace on "Sar" that will have your head spinning. They do hit some punches against a sonically heavy wall the sharply blinding guitars construct. They have you at the rapid tempo they seem to like lashing out with until they break things down to an acoustic guitar and chanting for a minute then the whirlwind stirs things back up again. If it wasn't for the attention to detail with little things like they breakdown, they might have lost me in some of this chaos. The guitar solo at the five minute mark is pretty impressive and was just what the song needed to give another layer. The riff that follows it sings with more melody almost a folk metal quality.I'll round this one up to an 8.5. At times the speed gives their sound a uniform feel, it's the flourishes sprinkled in that make this stand out more than the feral spirit that attacks your ears.