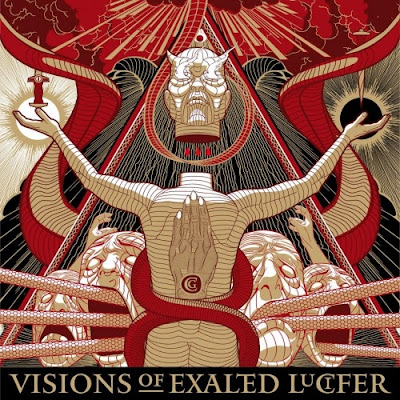 Named after the "Haunted Pass" these guys are reppin' the north side of Mordor. Out of the Netherlands, these guys came from the late 90s black metal scene, so it should not be a surprise that their 6th full length is very polished . On the opener they blast ahead with a very spacious sound that throws a lot at you at once. There is an ambiance to the chaos that hits like a storm. When it comes to a band like this I want to hear what sets them apart from the hundreds of others bands doing this sort of thing. It's not until "Of Black Dimensions" that this emerges. They slow down and the chants recite more of an incantation rather than scream. Sure they don't hold onto this kind of restraint for long when they return to full throttle mode on "...And Demonic Wisdom". Though this song is not as cluttered and the vocal take on a croaked tone.

By the time we get to "Wille Zur Macht" it is not a question of if these guys are any good or cvlt enough, it's what else can you give me ? The blasting blitz of this song tells me while they have shown me earlier in the album they are capable of summoning other tones and moods, they would rather just play it safe and blast beat off. They are good at this style of black metal. But is this style of black metal any good? They respond with "Rite of Purification" which takes a more melodic turn, which is just what this album needed. I am not saying every black metal band needs to be Watain, I do think it's more of a challenge to be insanely heavy and still hold melody and dynamics high on your to do list when it comes to song writing these days. For black metal to thrive as a genre this is what needs to happen or it will be blast beaten to death and people will look back on it like hair metal is seen now. Does this band sometimes tread closely to the Watain/ Dissection sound when they do get more melodic...yes. This could go all the way back to Bathory, but it's  not reaching very far to think a band notices someone like Watain is selling tons more albums and tweak things a little. Though it's a small touch the sample that ends "Rite..." is enough attention to detail to push there sound a few degrees apart from the herd.

They go for a big fast ending when they close the album with " Into the Nameless Void". Some times the vocals find a cadence over the riffs that gives more of a hook. As a rule however the song tends to fall in line with the other obligatory expectations of the genre. For a genre based in non-conformity this band and many others play it too safe. Things do slow down at the three minute mark and go deeper into a more melodic darkness.  This works for me, but when you think of all the time invested into doing what has been done, when they could have tried making something more musical, it leaves me a little flat. Granted it touches back into Watain land, but at least that is different than re-hashing a church that has already been burned down. I'll round this down to a 7.5, I think I've already touched on what makes this album work and what is not as effective, but if you are hungry for new black metal this is well done for what it is.
5.6
Posted by Wilcifer at 9:01 AM