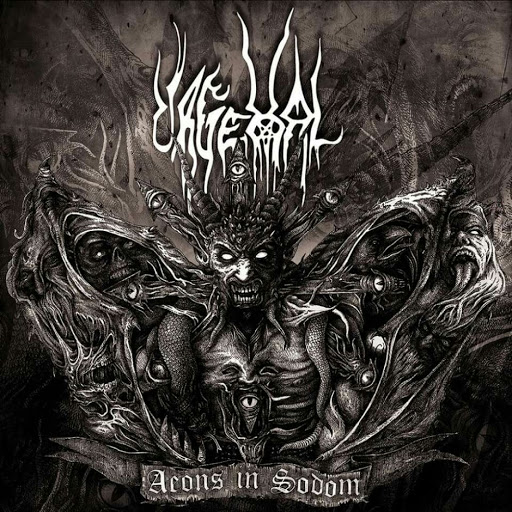 Many of you might only know this band from the sight of Enzifer's spiked face masks that makes him a Pinhead look a like, but you missed out on a classic black metal band if you dismissed them from there. This is their final album guitarist Tondr Nefas, whose solo's appear on this album died in 2012. The reports of his death are shadowy since he died from natural causes at the age of 34 out in his favorite place in the woods. So some undisclosed condition was obviously afflicting him. The album has a who's who of the Scandinavian black metal scene contributing to this swan song. With even Darkthrone vocalist Culto lending his voice to the song "Iron Children".  there is a very strong Venom influence. One thing I like about these guys is the fact they really care about writing actual songs and not just throwing a tone of blast beats at you. This is not to say they can not indulge in that vein as They is a little more of your typical Nordic black metal on "Blood of the Legion" with M. Shax lending his throat to this one.  They keep up the pace with "the Sulphur Black Haze". The vocals have a purpose and the lyrics make it through the rasped gasping of Taake's Hoest. The gang vocals add to this before they descend into something really creepy. Sure they used to go all out on the theatrical presentation, but they have enough hate and darkness to be taken seriously.

They bring on the blasting with "Lord of Horns" shifting into double bass as needed when it's time to shift speeds something that's a blur to something still faster than most thrash. They don't numb you out with the sonics and keep a thicker almost more death metal like guitar tone. From a production stand point the drums are produced with a big death metal like sound as well. Koldbrann's Mannevond handles the vocals on this one.   There is more of an undulating groove to "Norwegian Blood and Crystal Lakes" . The anguished croak of Niklas from  Shining, is unmistakable.  For these guys the stomping accents of "Thy Daemon Incarnate" is more of a mid pace with Vulture Lord's Sorath contributing the vocals.  The bass doesn't disappear in the mix and for black metal retains a presence not unlike that which can be found on the first few Venom albums. They pick up into the more thrashed out tempo on "Endetid".  With Nattefrost throwing down vocals , the band starts off with a dense momentum and then litters the song melodic nuances, Showing that you can have the best of both worlds and capture raw intensity while having attention to detail.

They are full blast ahead at the onset of "Psychedelic Evil" . Nag from Tsjuder's  vocals are less intelligible and more like crazed snarls.This is one of the album's more straight forward songs. Oddly the last two songs on the albums are covers, respectively "Funeral Rites" by Sepultura and "Twisted Mass of Burnt Decay" by Autopsy. I think the fact these covers are by death metal bands, speaks to the fact that these guys came from a era when that was the heaviest thing going. Both songs are done justice with the Sepultura being the best two with the singer from Sadistic Intent handling the vocals on that one. I'll round this one up to a 9 as it's a fitting final chapter in the legacy of the band and the guest list along should make fans of Norwegian black metal want to check this one out. Seasons of Mist is releasing this one.