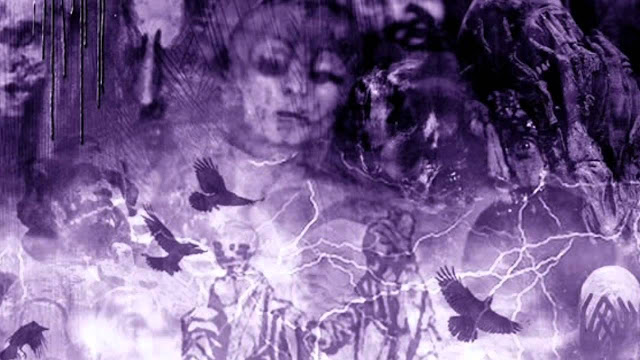 Continuing to look back at some classic depressive suicidal black metal albums and see if they are as good as I remember them being, which will culminate in our top 10 depressive suicidal black metal albums list. The final album by this project, which might paint frowns on some as it's not the first album of the most overlooked album, but it is more fully realized and sounds better production wise than the bulk of the Xasthur catalogue which goes a long way in my book because it means you care about the songs. That is not to say the tinny bed room sound is not present as it surfaces on the second song "Broken Glass Christening" . The dark angular sonic night mare many of these songs create is displayed even when they revert to the bed room sound. Sometimes this takes a more abstract feel blending into the shadows like the soundtrack from a David Lynch movie is an exorcism suddenly took place.

"Stream of Subconsciousness" almost has a shoe gaze quality. It is not the first time The lines between what was heralded as black gaze and dsbm became hazy. It is so atmospheric until feels more like an interlude than an actual song. I love Swans like feel that hangs in the guitar to "Karma/Death" . The vocals keep at their static squawk. In my mind the disjointed quality to how the instruments are arranged could really only work in this project. What lends credence to this belief is the fact I haven't heard anyone else to it an achieve similar results. "Horizon of Plastic Caskets" and "Mesmerized By Misery" bleed out into one another and while they create a chilling atmosphere, seem more like movements rather  than standing on their won feet as songs. "This Abyss Holds the Mirror" finds the gurgle of lower growls and the dirge like plod giving this one more of a funereal doom feel. "Mourning Tomorrow" is another atmospheric interlude that carries a hypnotizing floating drone. This is solidified by the steadier beat to "Miscarriage of the soul"

"Obeyers of their own deaths' feels like it submerses you under a spectral sea. The riffs are defined and fit the black metal mold. This is not to say this projects sound is compromised. It does black metal it's own way even here. The twisted romantic nature of this album is in full ghostly force on "Released From This Earth". The wail of female vocals continue to drift which gives a uniform feel to some of the songs. These vocals belong to Marissa Nadler who we have covered here in the past. The "Darkest Light" starts off as a a pretty powerful piece of atmospheric black metal before it ebbs down into a lighter shade of gray and ends with the final song that is more of an outro. I'll  round this  this album album up to a 9.5. It's more like listening to a symphonic work that plays of themes rather than an album of songs, but the sound captured here are pretty incredible.