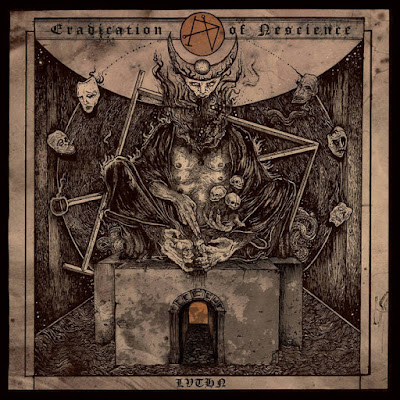 While we celebrate black metal this month it is very evident that some things need to change. The genre is beginning to get a little lazy. This happens with any genre who doesn't build upon it's foundation. Grunge and hair metal both saw this complacency give way to new sounds to do away with them. The became parodies of themselves. Now with Ridley Scott announced to direct the Lords of Chaos movie, it could serve as the "Singles" of black metal. The opening chords of the first song from the Belgium "occult" cvltists debut album the promise of dark atmosphere and then the blast beats blow everything out of the water. A few degrees of tonal difference give this a different sonic texture. In the second song there is a Deathspell Omega like dissonance lurking under the chaos of the chords flying at you , but not really much less to set this sound ahead of the pack. The fury of this flurry continues to consume you in it's swarm, but the finer points of song writing neglected. The mid range rasp of the vocals varies little from song to song. "Ecstatic Liberation" rushes ahead with it's march into battle and begins grating on me.

Once we are racing away with "Ascension into the Palace of the Dark Gods" it almost becomes a senseless blur until things break down at the four minute mark. This change is just chord rung out over minimal drums , but helps build the sonic tension from there. So when the blasts come back they are more deserved. I'm not anti-blast beat, I think they have been proven very effective in the past, but re-creating what has already been done speaks for it's self. I want to hear blast beats used in new creative ways. The drumming is more impressive in "My Indignation" that follows. It even leads into a more epic metal chord progression before defaulting back to the safety of the familiar. "Radiant Wolf" starts off with some impressive drumming , but descends into the blasting muck that all too often plagues this album and drains the personality from it. At the four minute mark the songs strives to redeem itself breaking down tonally and dialing back the intensity. The vocals drop into a lower almost spoken growl.

"Uncreation's Dance " doesn't get my attention until the songs final few minutes when it slows down into a more undulating throb. To their credit the vocals almost create more of a hook here. This is not saying black metal needs to have pop hooks, but memorable vocals help make memorable songs. The title track starts off in a more melodic direction and then paints itself with the same shade of black the rest of this album is slathered in. I'll give this album a 6, if you can't figure out why then go back and re- read this review.Just released this week on Fallen Empire.