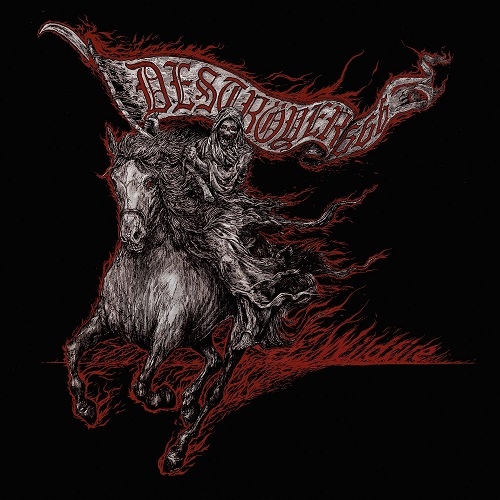 It's clear that early Slayer is engraved in this band's dna. I can hear a little Venom in the vocals, but right from the first falsetto scream it's showing you no mercy. The lash out with the chemical warfare of their riffs. They keep up the speed for "Live and Burn". The vocals are well placed. It's a forceful thrash narrative, snarled more than they are screamed or sung. They production on this one puts the guitars way up front. Nothing here is really new under the sun. The is a pretty powerful riff driving "Hounds at Ya Back". The almost punk rock approach to the gang vocals on the chorus works in a more Motorhead than what they opened the album with. They get a little darker with melodic guitar that bring "Hymn to Dionysus" alive. This one throbs rather than having to race off into the night recklessly thrashing.

There is no shortage on thrash n roll on the title track that attacks with punk infused energy. This also takes them a step backwards into something much more simplistic. It's littered with several guitar solos Kerry King would be proud of.  "White Line Fever" is an ode to what I imagine is cocaine. It rips along the line of a more amped up Venom. An actual sung vocal shows up on this one. "Die You Fucking Pig" is another more straight forward thrash and roller, I prefer when this band shows more depth and digs a little darker on songs like "Tamam Shud". This one features actual singing, via a powerful baritone croon that works well with the melodic textures of the guitar.

Where nothing is new under the sun particularly when you are pulling from this era of first wave black metal, but they do touch on places where where I can really here who they are as a band. For some this might be too polished of an album if you prefer the earlier rawer sound of war like black metal that winks the most violently at thrash. I do think this production value aids the songs and keeps them from sounding like a cluster fuck. I'll give this one an 8.5 and see how it sits with me, the darker moments I really dig, the more straight forward songs I see getting fast forwarded on a regular.comes out next week on Season of Mist.