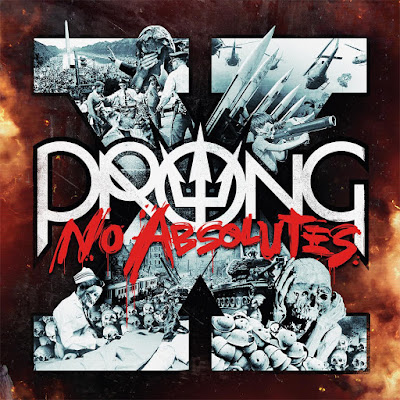 Yep, Prong was playing this kind of groove metal at the same time  Pantera...came riding out as the Cowboys from hell, which served as a turning point for metal .  On the opener of the band's new album they are just playing along with their own bandwagon that is much further down a road whose time has come. Tommy Victor is the only member from the  "Beg to Differ" line-up. "Sense of Ease" doesn't really find the band playing to the strengths of their signature sound and instead racing off into the kind of thrash they turned the tables on in 1990. "Without Words" holds a tighter groove that comes closer to making you snap your fingers and your neck with a very Killing Joke influenced chorus. "Cut and Dry" lives up to its name in providing a description of the brand of groove metal they engage in on this one. Some of the difference between this album and what happened 26 years ago is the production. Mark Dodson who produced "State of Euphoria" and " How Will I Laugh Tomorrow", was a forward thinking producer at the time. Here the band has more of you typical mall metal production which is the equivalent of if "Beg to Differ" was produced by Alex Perialas instead.

The more tighter staccato chug of "No Absolutes" finds the band playing closer to their strengths despite the more obvious hook of the chorus. The rest of the band get the job done with former Winds of Plague drummer behind the kick and ex- Stone Sour bassist holding down the bottom end. They dip into almost pop punk on the more melodic "Do Nothing". Victor's voice has grown stronger over the years and he is not just limited to the bark. His singing voice gets the job done, his range is not jaw dropping as he carries a modest tune. They beef things back up for "Belief System" that finds the band back in more classic territory. The guitar solo in this one shows Victor's playing has also improved after serving as Danzig's side man. They get into more of a proto-Nu Metal on "Soul Sickness", but Victor gets the job done where bands like Fear Factory got bogged down in redundancy. Then in turn they fall prey to similar glue sniffing doldrums on " In Spite of Hinderances' which thrashes about with no clear sense of target for it's de-manufactured aggression.

The bass line that opens "Ice Runs Through My Veins" could have taken the song in more of a post-punk direction, instead in stomps around typical post- Head Banger's Ball rock music. The Killing Joke influence is still there , but run through a filter of Linkin Park. The pop punk undertones are still haunting the song as well to make this more obvious. Then it's back to the late 80's for the thrash riff of "Worth Pursuing" as Victor's vocals coast over it much like Jaz Coleman of Killing Joke. They close out the album with the almost poppy "With Dignity" that brings Linkin Park to mind again. The hip-hop undertone are not there, but the guitar feels a little dialed back to bring the vocals up to a more radio friendly mix. Not sure this is the wisest direction to move in making the lyrics a little ironic. Listening to this album did make me go back and listen to "Beg to Differ" again and I'm sure I'll also give "Prove You Wrong" another spin, maybe even try out "Cleansing " which is where I parted ways with the band as I was well into death metal at that point and they just did not seem heavy anymore. This album starts off strong, the Linkin Park moments are far and few between, but the fact they exist made me round this one down to an 8, which is still better than just decent and if you are a fan of 90's groove metal then you will want to round this up.