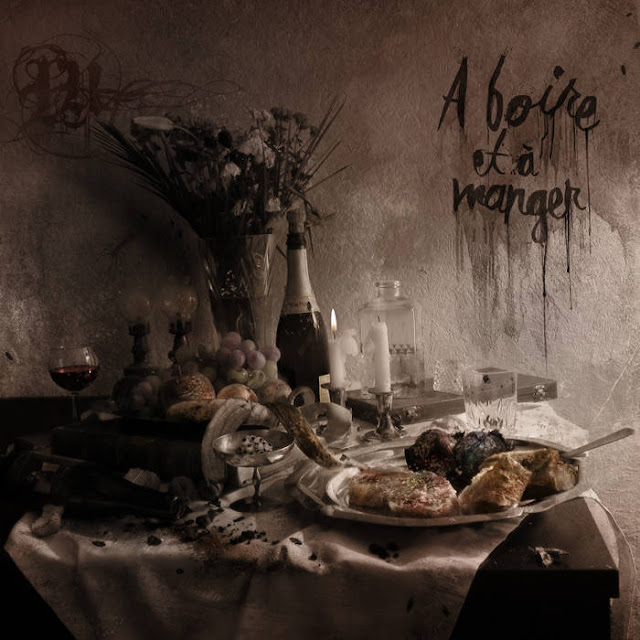 How experimental do you like your metal is the first question you have to ask when going into this one. French metal bands have never played it safe. This takes that to a new extreme Starting off like something you might hear in the Big Easy they pulls from a style of jazz that later influenced the creole jazz of New Orleans influenced Jazz it flips into metal that is noisy and dissonant. This is dark enough to make me happy, but after hearing it called depressive black metal my expectations were something more like Lifelover or Totalselfhatred . Instead of anguish and emoting we get something more like death metal even though there are croon clean vocals that come like something from a Mike Patton project.This is totally original despite the comparisons to John Zorn that could be drawn. The guitar playing might sound disjointed at times, but I think this is all done very purposefully. The blast beats come in spasm like burst lingering when the New Orleans street jazz returns. "La Marche de Travers" sounds like something from a funereal on Bourbon Street. The drummer's chops are more evident here and really every one,  but the vocalist has proved themselves by the point in the album. The clean vocals chime in with a drunken chorus as the music dances around it. The rock against rock feel of the arrangements being some of the most confrontational elements comes front and center. The song sounds like it is falling apart on it'self as it implodes with an angular grace. The trumpets play a larger role than I imagined the might after the first song

.
Even though it's entitled a interlude the fourth song clocks at five minutes. Sure it's an instrumental , but it is also a song , whether it really has direction or not. When some of the phrases end in a neatly tied bow, you realize these guys know the rules that they are throwing out the window and this album sounds just like they intended. The bass player would be this album's unsung hero if he had gotten a better shake in the mix. Sure they are metal, but black? the jury is still out on that going into the fifth song. The vocals are low and death metal before they swing into the circus like Biguine jazz. There is a very progressive element to it here as despite the vocals that almost bellow their way out of key, this circus keeps the trapeze flying.The first black metal vocals can be heard on "L' aphone et la Flore" this in turn sets the stage from the band to converge behind them to cross over into black metal. This is done without resorting to blast beats and is the first song that really sinks it's teeth into to make me a believer. The more death metal like vocals bellow over the jazz as the drums catches up with a flow of double bass until the go into the more staccato big band sound. Operatic female vocals come in at the tail of this song to add to the dramatic chaos.

The big top elements are showcased right from the sampled circus sounds that open "L' Helicon" . The bass fights it way to a more prominent place in the mix and things darken. I can hear this album appealing to fans of A Forest of Stars and even Sigh. This song has a cleaner sound as the chaos has become more organized in the studio for this one, despite some of the drums sounding like they are being kicked down a stairwell in places. There darker mood does bring this a little closer to being black metal even though there is more double bass than blast beats. The outro"Morceau en Moins"seems like a more disjointed ending for the previous and might prove the drummer is a bad ass if you didn't recognize that by this point in the album, doesn't really feel like a free standing song. I'll round this up to a 9.5 just based off sheer originality and though it might be more blackened Experimental death metal than something that burns churches on it's own accord, it gets into splitting straws and trying to define this band gives you more of a head ache than trying to keep up with some of the twists and turns this album takes.