Magnet School : "the Art of Telling the Truth" 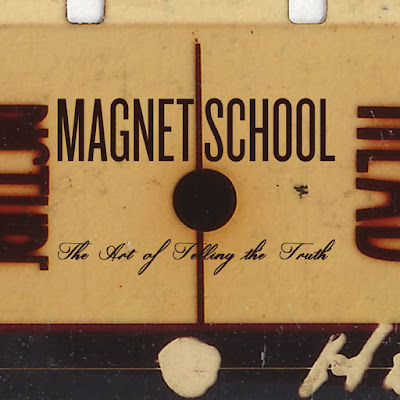 I would have been willing to bet these guys were from Cali instead of Texas, but the indie scene in the Lone Star State is gathering steam since they have once of the largest music events in the world now. The album opens with a song that has a similar kick that Minus the Bear once had before they became more invested in writing pop songs. These guys are dynamic, smoothing out into something with more of a Police influence that isn't too far removed from Mute Math's zip code , but with more attitude lyrically. They launch into a more driven rock with "British Monuments" that is more straight forward until they drift off into a more shoe gaze like middle section. They grow heavier on the instrumental "Swandive" that builds mood, but these guys work better with vocals as part of the mix. "Irresistible Lie" they float off into dream pop, with pop emphasized on the vocal melodies. They hit the best balance of drive and atmosphere without trying to hard to hook you in with the vocals on " Fur & Velvet". This takes you back to the 90's when post-hardcore was hitting it's stride with bands like Sugar. The bass line to this one is really strong. "Walk Down" however just comes off as more of an extension of the previous song.


"So Long to the Heavens" has a strong chorus that adds glue to where the airy ramble of the verses let you drift. They become more laid back for "Red Giant" that finds the song riding the fence between spacey and pop, which gives this more of a Brit pop feel. One thing that is for sure about this album are the guitar tones are all really dialed and is where this band is most on top of their game. "Fare Thee Well" has some of the album's better drumming on it, but once again this is another instrumental where the band are better than decent song writers and they aren't really playing the kind of post rock. These guys have a ton of potential and if you miss the glory days of late 90s post-hardcore then this is a great take on it. I'll give it a 8.5.