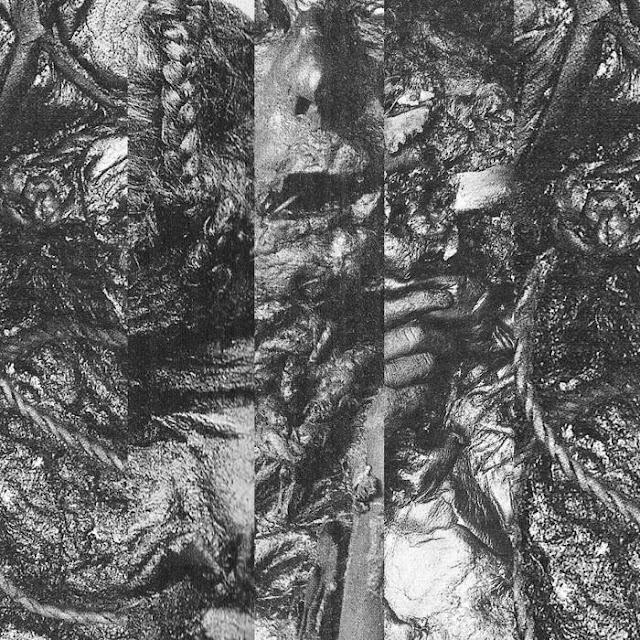 This band from Denmark pounds into their crusty brand of black n roll rumble with a commanding bark. Their sound owes more to the early days of black metal than it does anything post- Darkthrone. The songs are quick punk tinged bursts of burliness. "Submission" finds the bands punk roots coming center stage and stomping on your ears in a very straight forward fashion. By the time they launch into "Own the Night" the sonic monochrome of their sound has begun to wear on me. The chant of the chorus  reminds me of Ministry's "Burning Inside" The songs begin to run together, the hyper speed of a more feral version of Motorhead courses through the veins of "Noose". The  chorus  might have a shouted accent of the song's title,  it still  doesn't distinguish it self much from the rest of the song or any other of these songs. "Exsanguination" has a little more groove to it's stomp. At this point in the album the vocals which started off carrying a punch, now become tiresome as it's the same bark song after song. This one does have more of a hook than some of the others.

It's easier to make out the lyrics to "Ligature Marks" , but musically this song fall in line with the others. The albums longest song clocks in at only two minute and forty seven seconds when it closes out the album. They do not use the time to expand upon anything that has not already been touched on, which is pretty much the same four chords. Their over all sound is cool. In fact it got my hopes up on the first song as I wanted to hear where else they could take this sound and the answer proved not that far. This album is a must for punk rockers who only dabble in metal, but what you hear on the first song is what you get for the entire album. They are very dependable at pulling this off, it's just not the range of dynamics I need from music. I'll round this one down to a six. It's blackened punk rock if we are going to really be honest here, but they do manage to darken the venting of their anger in a way that might not beg for corpse paint , but it does make a convincing argument to tag themselves as black metal.