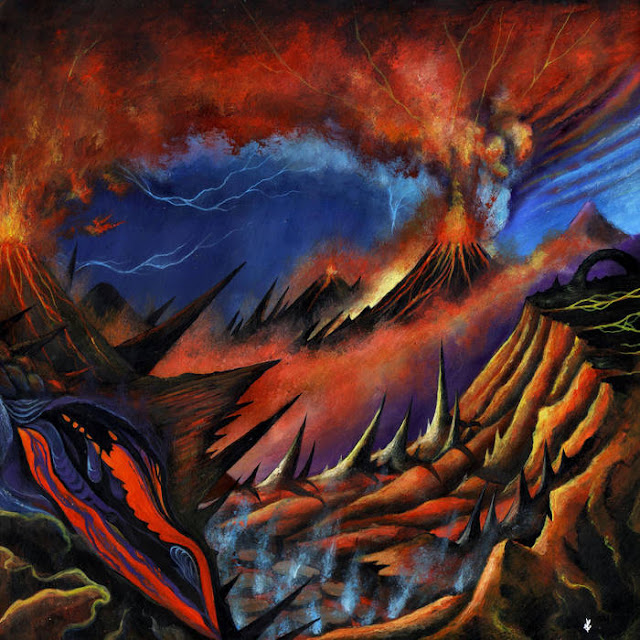 Released by I Void Hanger Records for Black Metal History Month , this one-man band that will fool most people into thinking this has to be four separate musicians playing this . Alp who plays every instrument and did so in a very organic manner. It doesn't hurt that  The album was mixed by Colin Masterson. The guitars have a lot of clarity. The rasped vocals are mainly mid ranged, though there are some monstrous lower growls that take more of a background role. It might make you sick that this guy plays drums as well as he does and can still play guitar. There is a more Deathspell Omega like dissonance to "Fragmented Body". It is angular and less straight forward than the opener. It's not until at creepy riff midway into this one that it really grabs my attention and form more of an identity of it's own.The drumming and bass line latch onto a sinewy groove that is progressive for black metal. Some times the vocals seem like an after thought, but that is the only weakness aside from relying on blast beats.

"Pangea" is a concept album, the narrative doesn't make itself obvious until the krautrock horror movie soundtrack interlude. "Reciprocity of Disrepair" that follows is a blast fest.  The riff over this speeding beast, is textured and has a chilly dissonance to the melody it weaves. When the blast beat gives wave to double bass it seems to gain power and momentum while retaining it's black metal sensibilities. Some shredding solos sweep in over this one. It's the weird riff that comes at the five minute mark that stands out in this song.  A lesson in compositional chaos, the song moves well and has some power to its punches.  The acoustic intro to "Storms Continue On" helps break up the album and you on a darker ride. The layered growls take on a more Emperor like rasp. The more melodic edge this song has also furthers the Emperor comparisons.

Overall this dude is talented, where this album will rank with you really depends upon how original you need your black metal to be. If you are looking for something that sounds nothing like any band you have ever heard before then this won't rank high with you, even though it is not directly derivative of any one band, it's more the gnawing sense this sound is familiar. I'll give it a 7.5 for the lack of new ground being broken here, This might still grow on me, but I generally get more play out of black metal bands with a more dynamic and melodic focus, where in many ways this is more straight ahead ,despite creating an effective atmosphere and being excellently executed. This will appeal to fans of black metal who want something more progressive than Darkthrone, but not ready to commit to Emperor. I'll keep an ear out for where this guy goes in the future.