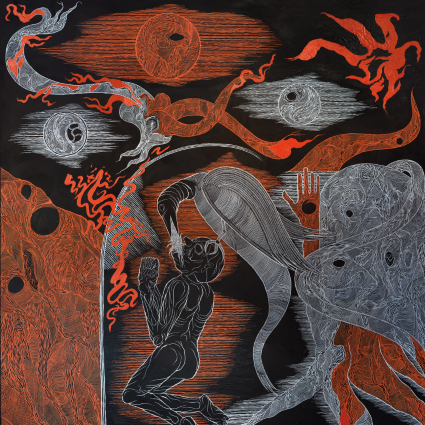 This German black metal project starts with a blast and winds their way through a maze of angular dissonance. The blast beats keep things at static drone most of the time with a few riff baring their teeth to lash out with a more metallic aggression."A Time To Die" has some jerking stops that help it from becoming a blur. There are a few melodies hidden within the guitar that are handled in an almost Liturgy like manner.There is a few degrees more melody in " I Wound and I Heal". The lower growled vocals and a few of the sharper sonic punches are the only thing that make " Devastation and Desolation" stand apart from the first three songs. Things grow darker on the slower throb of "Drunkenness and Sorcery". It doesn't take long for the obligatory blast beats to speed things up. In the final few minutes of this song some darkly melodic moments breathe new life into things.

"I am Nothing" builds off of some of the more melodic themes established in the previous song. The vocal begin to get a little grating at this point in the album as they continue to stay in the coarse mid range rasp. They are more of a a growl than a scream, making them less emotive. "On the Bones of the Dead" refuels the dense drone and drags you into the colorless world of sound . This is mean enough for even the most hardcore black metal fans, but what do you want from music? This question is asked once I begin to feel my attention slipping away at this point in the album.  Are there rubbery riffs that lurch in unexpected ways? Sure but all roads lead back to a more predictable blast taking the sense of adventure the more math infused progressive paths they promise to take you down. The album closes out with "the Amen" . This is powered by an even faster blast. This song was left to play as I did other work and when I stopped to check how long this song had been playing the album had looped around to the first and I never stopped to think, well this is a new song, which speaks to the uniformity of the sound on this album. Creative and possessing it's own sound this project doesn't directly pull from any one influence and has woven together a collection of dark sonic delights, however these tend to run together and many of the songs sound the same , so it really depends on how much diversity you need with in one album. Dynamics are very important to me , but I'll acknowledge the talent put into this so I'll give this album a 6.5.