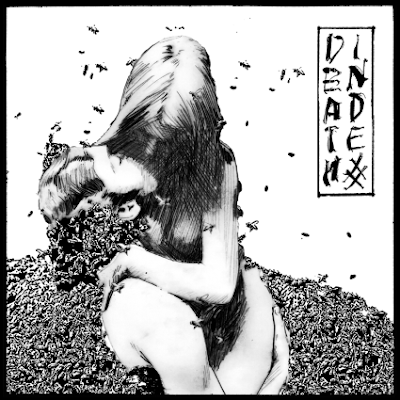 This one just popped up in my in box with little buzz around it. Carson Cox got his start playing in hard core punk bands before starting Merchandise. It is weird hearing his  croon over the more pounding pieces. It makes more sense on "Dream Machine" which has more swagger and finds them meeting at that cross roads in the 80s that I am such a big fan of where punk got darker and more melodic. "The Meal" finds this throbbing down an even darker sonic alley. It's not smoothed out like Merchandise, and has feedback squealing off the edges. When they throw themselves into a more boisterous punk on the short blast of "Furio Controllo" it  has more in common with more the Stooges that say Negative Approach. The punk spasms come from unexpected places. They jump out at you from places it might make more sense for a chorus to come from.

Carson works with the music on " Little N Pretty" allowing the vocals to carry all the melodic weight and in creating this jagged post-punk feel , while the guitar stick to very straight forward style of punk playing. The first song where they wander out into left field for experimentation is " Lost Bodies". The effected vocals would not be out of place on an industrial album from the 80s. Considering the more radio rock direction Merchandise went on "After the End". "We've A Got Number" feels very honest even with the rambunctious attitude that explodes from it. The over driven thump of bass drags the gritty brooding of  "JFK" out into the daylight.  It's droning lumber has an almost Swans feel. "Patto Con Dio" hits hard  with out relying on aggression. Cox's vocal has enough room to move the melodies around. The final two minutes of this one they let boil on noise.

I'll give this one a 9, though I think it will continue to grow on me"Lost Bodies" has some cool sounds , but it is the only song I don't feel like I will need to have with me when I am on the go. Overall there hasn't been a punk album dark enough to do much for me in sometime so it's good to hear something fresh from an old familar voice.