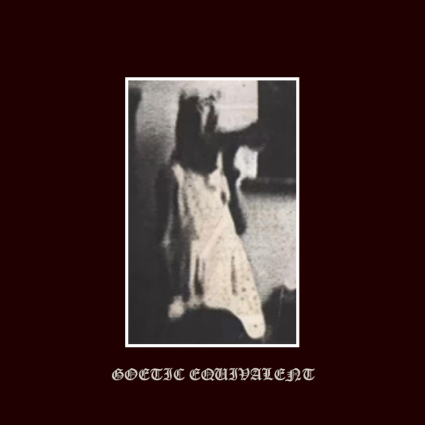 This is the 25th installment in our Black Metal History Month series, so I am way ahead of the game when it comes to hitting the goal of 28th for the month. Meaning there is no shortage of black metal out there. There is a shortage of good names since Goetic Equivalent is one dumb name. It's even weirder that a Greek band named themselves that, but oh well. The vocals are croaky, but not a total Immortal rip off, though I am sure they are an influence.The bass player is way up in the mix which gives a different dimension to their sound than the buried bass and in your face tremolo picked guitar and blast beats most bands stick to. They self identify as cthonic cerebral black metal. This must be short for we are not totally rock kids who want to be Darkthrone. There is an angular yet melodic vibe to their music. Songs like "Emptiness" do pay it safe and stick close to the more pounding style of black metal.

It makes sense their would be a slightly heady air to "Psychonaut". The dissonance here is fairly melodic and the pulse of the riff gives the song plenty of room to breathe. It also allows you to hear how talented the drummer is. This locks in a commanding groove that should inspire plenty of head banging even though this is thinking man's black metal with resorting to becoming a full blown prog band. At the other end of the spectrum they touch on the more punk side of black metal for "Illuminatory index" . They do not abandon some of the more sonic chords they let ring out. They play more to their strengths on "Patient Shore". The drums have room to rip and the thundering sinew of their riff is tight as a nuns ass hole. Oddly for a black metal band it's when they go into the blast beat that things lose a little of the power . "Paradise Anew" reverts back to the tug of war into a more primitive straight forward pounding. The bass works well even beneath this , but over all the song wanders too closely to ground I have heard them cover.

"R Candy" has one hooky melodic riff in it that the song returns to that i like, but other than that follows a similar sonic formula. They iron things out with a sense of renewed purpose on "Chapel". This does cost them some of their heavier edge, but the album did need to broaden it's sense of dynamics. It drones on a similar pattern for the bulk of the song. The vocals haven't really added much to the album so the fact none seem to surface on this song really doesn't phase me, though not sure this song stands on its own as a instrumental . Overall there are some good ideas and interesting sounds that stray from the run of the mill blast beat you to death black metal, to the point of making you wonder if this is indeed black metal. I'll give this album a 7, it saw digital release a few years back and is finally seeing a proper release on April 1st.