The Body : "No One Deserves Happiness" 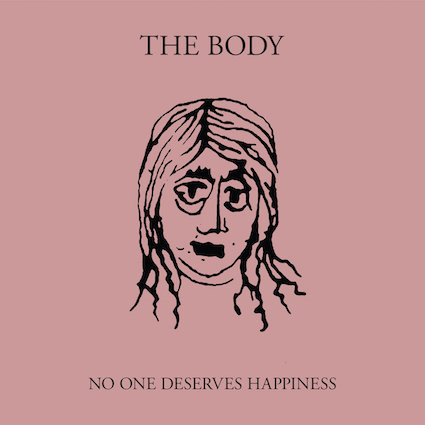 I think the reasons I have not been into this band in the past have been put to rest on their new album "No One Deserves Happiness". The tortured bird screams are still squawked in the background, but this is balanced out by layers of melody that are dark enough to appease me. Sometimes the drums have an organic sound at others they are more electronic. The overall result is something that finds the band at the apocalyptic cross roads where sludge and industrial meet. The second song finds the female vocals taking a more dominate role giving more guidance to the song with it's melody. The heavier pound that this band's fans will be waiting for arrives on "Hallow/ Hollow" . There is a little breathing room as the song drones on with the buzz of noise and distortion with the chorus of female vocals dancing around it to save the day. The experimentation begins to break new ground on "Two Snakes" as the beat sounds like it's from a 808 on steroids, the vocals are woven around it with a blend of effects and an additional harsh vocals that is not the normal squawked one emerges.

There is more of an industrial groove to the beat that opens "Adamah". When the vocals come in they create more of a post-punk sound, despite having a more soulful sound than your average Siouxsie enthusiast. "Starving Deserter" finds the varied elements they are forcing into a brutal coupling playing well with one another. What sounds like trumpets create a melody in the background while the female vocals offer a more chanted choral refrain and everyone tries to ignore the squawking in the back ground which brays in the same cadence for every song.One of the stronger vocal lines comes at the beginning of "the Fall and the Guilt".The music behind it is dark droning noise, so the vocals do all the heavy lifting. They dip into an almost doom like dirge on " Prescience". They come to a much more organic place than where they bulk of this album pulses from. The vocals on the closing dirge "the Myth Arc" remind me of Aimee Mann.
I'll round this up to an 8.5, as this is the best thing I have heard from this band so far. Granted I'm not what  they might call a fan, but it has prompted me to take more note of where they go in the future from here. I suppose I be their target audience for this sort of thing as it combines metal with dark electronic elements. Not as close to industrial as say Health they have created a compelling blend of the two. If I was still smoking pot I might be a little more blown away by what is going on here, but as it is, I think they accomplished what they were going for and took a big step in the right direction. Thrill Jockey will be releasing this on March 18th