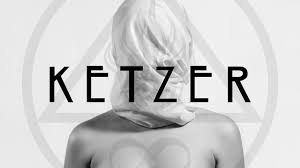 This is one of those albums that makes you question what black metal can be . This German band's third full length is well thought out from every angle. Well produced with out being gaudy. The vocals are the most black metal element to the  album. It is really on a song by song basis as to what shade of darkness these guys are bringing. The first song is oddly upbeat from the onset and they waste no time to defy what is expected from any genre. This is followed by "When Milk Runs Dry' that finds the band coming closer to a more Blackened Death Metal sound , but their is something about these riffs  carry a majestic air that death metal doesn't encompass. On "Godface" The punk influence on thrash can also be felt here, making this almost feel more like black n roll. Things darken on "Count to Ten".

"White Eyes" has groove and punches with authority, but is so melodic with the guitar pouring out hints of blues in it's masterful approach to solos. They touch on that middle path coming closer to death metal, when the vocals dip down into more of a lower growl. Their bassist plays a much larger role in their sound than the bulk black metal bands. "Shaman's Dance" has a similar mood as Slayer's serial killer love songs. This song is dark enough to be black metal, if Watain is still black metal as it comes from a similar sonic place. While they get pegged as being blackened thrash, they don't strike me as being all that trashy until halfway into this song and then the dissonant tension they hold the groove with slightly recalls Voivod. They throw melodic break downs in when you are not expecting them. What strikes me as black metal in a song like this is the passion put into the music. Black metal  tends of convey a greater emotional range than thrash or death metal.

There is no clean singing on this album, but plenty of clean guitar tones. One of the more organic sounding tones opens up "Earthborn". The guitar solos blazes in serving the song with melody rather than just shredding. The vocals on this song and most of the album are a hateful midrange rasp. The wretched undertones sit juxtaposed against the brighter triumphant mood. A spoken word invocation of some kind surfaces here as well. The album comes to a close with the instrumental "Limbo" which is not really metal at all but some kind of 70's rock jam. I can appreciate, but think it falls short of the heights the rest of the album achieved. This album really strong otherwise, I'll give it a 9.5.