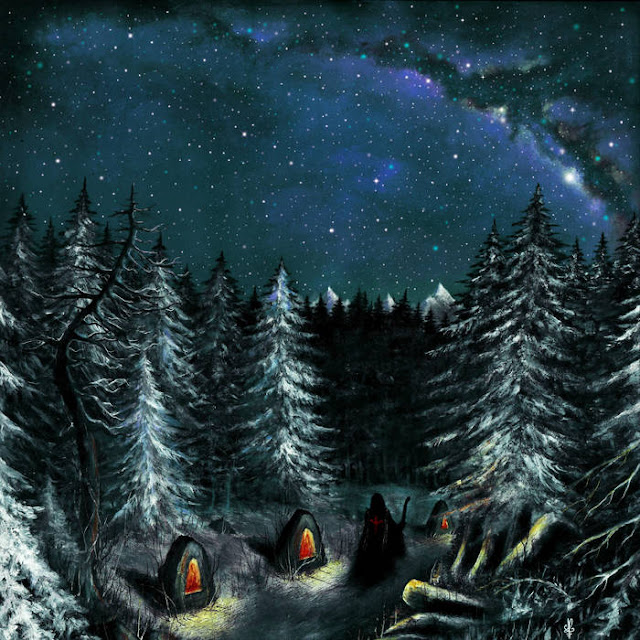 This one man project out of Scotland which is being helmed by Andy Marshall gets hailed as being atmospheric black metal, but to me it just sounds like how black metal is supposed to sound. The album is well produced, so maybe atmospheric black metal has become something that has a crisper sound than the shoddy black metal being pumped out of every dark basement in far corners of the world. While I can appreciate the drone that this album hypnotizes you with that recalls old Darkthrone, in more ways than just the blast beats, the second song "Blood" just sounds like an extension of the first song. At this point in the album they hit a sonic sweet spot where you are suspended in the hovering dusk they have chilled you with. At the seven and a half minute mark every thing drops out and the first thing that sounds like what I regard as atmospheric black metal occurs, since black metal is atmospheric by nature. Taking that into consideration you really have to lay the atmosphere on thicker than normal to earn that title. Marshall's guitar sound is bette than the drumming which gets a little weak on "The Oracle" .For a guitarist the drums are not terrible, though if you are too misanthropic to play with one other person then you need to get on medication, not every one can be Varg. The drums begin to become a sticking point for me here which is a shame as the guitar tone on the song almost compensates for it.It does improve when it slows down into more of a groove midway into this song and makes me a little less grump cat about it.Vocally the growls are low in the mix and pretty run of the mill mid range. They could do a little more convince me they are more hateful than they are coming across here. With harsh vocals they become just another static layer in the white noise if the emotion is not conveyed. Things take chilly and more dramatic turn on "Spirit of the North" and actually create some atmosphere that breaks down into something going above and beyond what black metal is already supposed to do. The guitar tone becomes something to rave about just before the song's mid way point has the trickling riff cascades over the song. This is the strongest song on the album by far. The rush into the more intense blast beat makes sense even though you are sorry to hear that riff go ,as you could have basked in it a little longer. A deeper growl comes in which helps switch things up and continues to make this song excel at every turn. The album ended strong, leaving me impressed and not hung up on the drumming. I'll give this one an 8.5, though I'm on the fence as to if I need this on my iPod. If you like second wave black metal , but want something with depth and clarity without just recycling Darkthrone riffs then this album which drops tomorrow is worth you time and is gaining a fair amount of buzz about, which I like for the fact as you can have quality sounds on an album and still be hip enough to be embraced by the grim cvlt of the inner webs.
Posted by Wilcifer at 4:09 AM