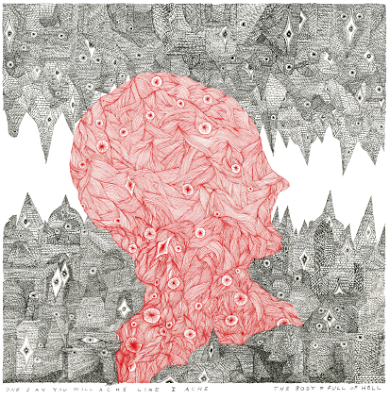 The Body just loves doing these albums with other artists. This one is more experimental and interesting than the collaboration with Kreig. The annoying squawked vocals from the Body are still present. The first song is more noise than music though there is a little metal tossed in. The second song is less metal, but more coherent in it's incoherence. The electronic elements are more center stage to the point of making this album sound like a re-mix. There is more of an industrial feel to their cover of Leonard Cohen's " The Butcher". It like the following descends more into clunking and pounding noise.Perhaps if it wasn't for the annoying vocal that the Body contributes I would think of it as a more organic version of what Author & Punisher does. It almost goes with out saying that this is a cover in the loosest sense of the term as it has nothing in common with the original version. It is more inspired by perhaps, but even there its hard to hear any Leon Cohen in this craziness, so maybe the joke is they are butchering the Butcher.

"Himmel Und Holle" sounds like they are throwing there instruments down a spiral staircase, but the industrial beating they give on "Bottled Um" is more to my liking as it might drone on the one riff, but it has more musical merit. They swell this one into a fairly expansive sound. You can hear more of Full of Hell on the raging "the Little Death". A lot here is contingent on what you expect from song writing and music in general. I think the album's strength lies in the places where they touch upon the place that has come about in the past few years where sludge and industrial meet. More often than not these songs drone on the one theme, adding intensity or sonic abrasion to it rather than composing a song that goes some where.  I'll give this one  a 5.5, if you love the Body and have a higher threshold for their tormented chicken noises then you can round it up a point. I think Full of Hell holds back a little here in order to play nice with others.


This is being released March 26th on Neurot Recordings

Email ThisBlogThis!Share to TwitterShare to FacebookShare to Pinterest
Labels: "One Day You Will Ache Like I Ache", album review, experimental, full of hell, Hardcore, Neurot recordings, noise metal, sludge, the Body