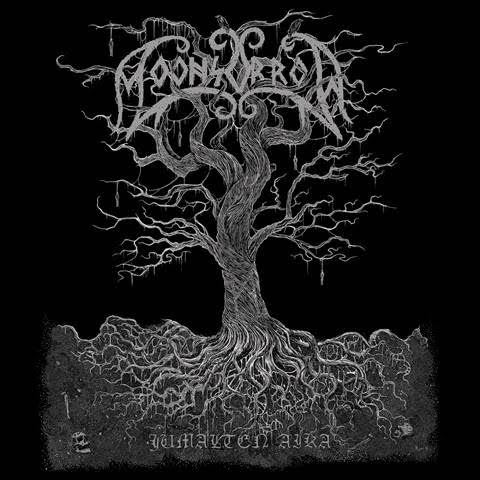 It's been five years since the Finnish overlords of pagan metal left us with "Varjoina kuljemme kuolleiden maassa". The album opens with folk instruments creating a ritualistic aura.After a  minute and a half of this they storm into the kinda of  larger than life metal you have come to expect from them. The black metal side of what they do is toned down on this album.They have more in common the more epic side of folk metal. Holding true to their mission statement this does have a commanding viking feel, without inspiring you to go into a jig with your drinking horn. They wait is in some part due to the ambitious production value this album was crafted with.  The drums have enough thunder to make Thor jealous. Production wise this might be their biggest drum sound yet. This drummer might have always been a monster, but this albums really shines a spotlight on the fact.

They have found the right balance of melody and muscle. More clean vocals abound, most are handled in a choral manner. There is something about one of the riffs leading into the verse reminds me of Deep Purple . The harsh vocal has more snarl to it than I remember from their previous work. The tone to this song starts off triumphantly brighter by a few degrees with the double bass really propelling it.As dynamic as the previous two albums it ebbs and flows in a similar manner. There might be more of the clean vocals chiming in from the background. Guitar wise to say they have achieved a fuller sound would be an understatement. The layers are well woven around one another.

"Suden Tunti" might find them slowing down, but they also get more aggressive. At seven minutes this song is a return to a more stripped down straight up metal sound, even with some of the folk elements that crop up between some of the punches. The gang chanting almost inspired a dwarven circle pit, unless you make successful savings throw against enchanted moshing. This is one of the album's most powerful songs. Speaking of savings throws, often the length of these guys songs has made them a band to use as back ground music for D&D nights, rather than something that got heavy rotation on my iPod. However I think these guys are one of the few bands that really make every minute count. Except for the sound effects that ends the album, few seconds are  wasted on droning or indulgent noise. Their indulgences as pretentious as they might seem to someone not really into this kind of epic pagan metal, are well played and take me away to icy battlegrounds.

"Mimisbrunn" does really take viking metal to a lushly orchestrated extreme. This soaring fifteen minute piece is the most melodic song on the album. In places it feels like the intensity is being compromised by beauty and then they hit you with a smack of blast beats. The double bass that sweeps in gives the needed aggression. This album might take them another step closer to progressive metal in the constantly expanding arrangements. They are relentless in hitting you with riffs that are as catchy as they are majestic. The clean guitar guitar passages allow the bass to come from out of the layers of drums it sometimes finds itself buried under. One thing these guys have going for them here is the fantasy element many bands of this ilk take on gives you the feeling their are bards telling a story they are detached from. Moonsorrow might be telling a story, but they dig into their souls and  spill a great deal of  emotion into the music.

They return to another stripped down metal riff to open "Ihmisen Aika" , but this is short lived as it builds back up into well... what this band does best. The bass is more present in the mix on this song as well. There are less thematic shifts in the first five minutes, but they come by way of a melodic break down that explodes into a much heavier section that finds it's way into something resembling black metal. There is a very symphonic lushness to song's third act that is well layered with textures of guitar and vocals. I'll round this up to a 9.5. They achieve perfection when they don't turn things into an opera. The more grandiose moments, are just not something I see putting into as  heavy of a rotation as I once did, unless it snows an here in the states the chances or March snow are slimming down. This might be the perfect album if massive viking symphonies are what you listen to on a regular. For what this is they are the best at what they do, surpassing Enslaved and Borknagar on the epic scale, though those two bands have a some what different and more mainstream take on what they do.