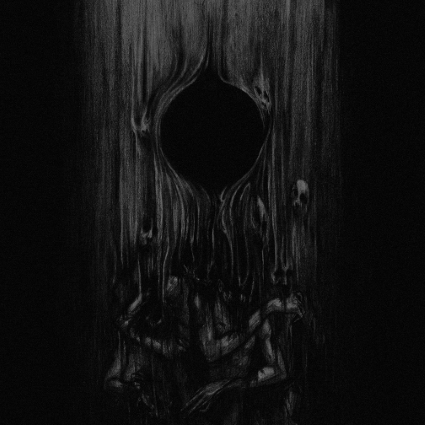 My friends at Cvlt Nation and I agree to differ on a few things one of them is the debut of this Oakland band. Once we get into the nuts and bolts of this album, long time readers will understand why. It opens with a strong snarl and a stiff chug that might remind you of old Entombed. The second song is more straight forward, maybe this comes with the d-beat genre, sure I can hear elements of crust and Entombed in this, the more hard core surfaces midway and things begin to groove more like Slayer.  Discharge and Motorhead  are two names commonly thrown around when tracing the origins of d-beat back, "Aberration" provides more of a argument for Motorhead, though it's thrown against a wall of grime ridden death metal."Consumed" is quick to re-tread the straight ahead style of hybrid death metal the band is invested in. "Hericide" leans into the more punk roots of the genre with the growled vocals serving as the most defining trait of the band at this juncture. The songs are all under the three minute mark so they are a fast jack hammering in and out. It's not until things slow down to a more doomed stomp that any dynamics are displayed.

it's back to business as usual when they rip into what is beginning to mark them as a one trick pony in the full frontal blitz that is "Rotting Twilight" they do accelerate into blast beats, but it doesn't cause that much of a dynamic shift. "Aeon of Suffering" doesn't do anything to change this trend and I might as well be listening to the song before this, until the doomy stomp returns with blast beat accents. It's an effective trick, but doesn't do anything to add more color. Some chords are allowed to ring out slightly more to offer a few grains of melody to "World of Ash" it's the same sonically monochrome assault that at this point had numbed you out until they chug into more of a groove. 'Circle of Wolves" returns to the more punk drive that surfaced earlier. The drumming is pretty similar to what we have already encountered and from punk to metal with these guys is pretty much a variation of a few degrees.

At three and a half minutes "Dusk Abuse' is one of the longer songs on this album. They rip into with the same fury, but it's all a blur by this point in time , as once I pass the minute mark then I begin to wonder if I am getting more of the same for the next two and a half minutes, the truth is they take it and shove it through a more blasty metal filter. I can appreciate the animalistic emotion that is vented into the song. I'' round this down to a 5.5 as it might have a ton of fury behind it but most of these songs sound the same to me with only minor variations to an all to frequent theme. Being released on Broken Limbs in March.