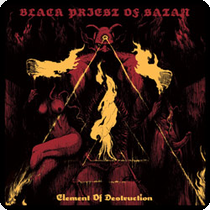 This duo's name might not be the most original, but it does give them a lot to live up to. They act as priests opening the album in a more ritualistic manner, before vomiting up a grime coated churn. Not slow enough to be doom, but far from reaching the speed typically associated with black metal, they still work in some of the staples like tremolo picked guitar. The drums keep things steady, rather than blasting. This creates a more musical climate. This German band is  raw enough to keep most fans of black metal happy. Even some chanted clean singing enters the fray. They cover a lot of ground on the first song and raised the bar to a height the second song falls short of .  It's more aggressive, but not as focused of a song. When it speed up things sound a little clunky around the edges.

There is a death metal like attack to "Blazing Fires in the Night".  Two and a half minutes into this the song breaks down for the band to lock into a steadier march into the darkness. The dramatic layered vocals are weird, but effective in that you can't put your finger on a band with a similar sound. Some times they do remind me of a moodier version of Mortuary Drape, though they are rougher around the edges. Dynamically this album has a lot going for it. The atmospherics they employ before "Unheard Prayer" help break things up as they drag themselves into a more cryptic doom heavy riff. Lyrically this is the first song that strays from the occult undertones to call out Jehovah, which I'm fine with as they seem pretty sincere. Once they reach the five minute mark this one begins to lose it's steam. This song also changes the course of the album as 'Ritual of 3 Candles" also follows a more doomy path. This song however is more air tight in it's construction. The synths that eventually come in add a lot to the song before it descends into ringing distortion.

The final song "Guided By Two Moons". This song is very dense. It's not until two minutes in that they begin to gain control over it.The guitar holds a static tremolo picked line in this that gives it more of a black metal feel.I'll give this one an 8.5 and see how it sits with me. If you are just looking for blast beats then this album is not for you. But if you like the more classic early black metal than it is worth a listen or two.