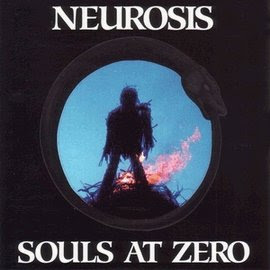 Unless you were on the musical fringe in 92 or a crust punk in 1992 you did not know who Neurosis was. I was working in a music store when this came out so heard the buzz from the fringes and checked in out. My first impression was these guys were a crust punk version of Swans. There was more metal however in their attack. My favorite thing about this album was that it was dark and sounded great on drugs. More dynamic than punk and many of the sounds barrow from death rock as the opening track unfolds, already a hug Christian Death fan this did not go unnoticed. It was sonically explosive in the heaviest way possible. The title track churns with the same intensity as most doomy metal at this time, perhaps a little rougher around the edges, the throaty vocals howling, was less common as sludge was not officially a thing. It carries a powerful stomp.

They bring a storm of sonic pummeling down on "Flight", It has an oppressive yet hypnotic quality to it that I like. My favorite part of the song is the creepy last two minutes when they exclaim "her eyes roll back". The 90s were the best time for samples and this is in the top tiers of albums that made the most of them. " the Web" churns with aggression and makes the best use of the dual vocal trade off.  The melodic bass line that slithers underneath is sublime. "Sterile Vision" is darker and more melodic, but it generally chugs around the same vibe they have been pounding so far, perhaps not as apocalyptic.  "A Chronology for Survival" might be my favorite song on the album, I like the vocal refrain of " cycles they are clawing". The overall vocal layering on this one is cool, and this is an album where even harsher screamed vocals are not just obligatory but serve function in the songs. The song is a very dynamic journey.

"Stripped" is one of the more interesting arrangements in terms of how it ebbs and flows there is a slight angular feel to how the riff turns around.  There is a little less focus to the journey this song takes you on. Clean strummed guitar become more common on later album, here it stands out more after the beating this album has already given. "Takeahnase" is a dark brooding closing song. The vocal exchange is between the howled vocal and lower sung vocal that is a more gothy. The more I have gone back and listened to this album over the years the more I can hear the post-punk influence balancing out the more explosive metal qualities.  I think the number of times I have listened to this album over the past few decades warrants me rounding it up to a 10, granted the dark weirdness is not for strict metal heads who just want head banging.