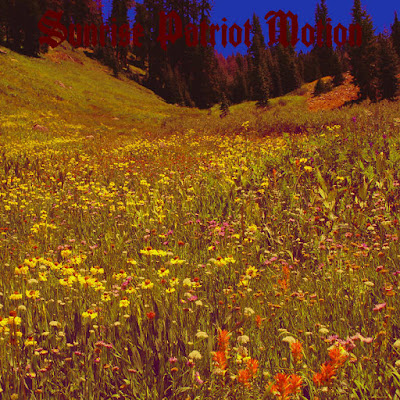 It's cool to review a "goth" album when it is not October. October is always proof the rest of the world is just catching up to how I am the other 11 months of the year. I would gladly review "goth" albums all day , if there was that many coming out, but they are few and far between. "Goth" is a more popular hashtag on Instagram than it is a musical venture. To the extent that this band, considers themselves to be black metal which is very unfounded. Though two songs in and their more aggressive side seems to be along the lines of Killing Joke. The guitars are creepy and atmospheric more often than not. The vocals have a throaty rasp to them but are not screamed or growled, sometimes yelled, but in a more Laric like manner. There plenty of Halloween like keyboards to offset this, though the vocals are very commanding from the ghostly cavern they echo out from.
Death in June and the Birthday Party are also vibes I get from their sound. They are not drawing influence from the more typical sources like Joy Division and the Cure. There are metallic hints with the guitar of "Oil Dream Field". This forceful vocal gets a rawer crust punk sheen on "I Search For Gasoline". They are angrier than they are languishing in depressive darkness.  "My Father's Christian Humidor" is not only a hilarious song title, but the album's most conventional post punk moment so far. The vocals continue to howl in the distant and the atmosphere gets fairly dissonant as the song progresses, but it all seems to work well.
"Cruel is the Joke" simmers on a similar sonic scope to what we have already heard from these guys. The guitar injects a little more rock into the proceedings on the last song, though the vocals howl from a similar place. The riff is rather angular in its odd timing. They vocals are interesting on this album, I like the fact they have balls to them and not trying to be Ian Curtis, and that is the weak point of their sound, which still leaves an impressive collection of dark sonic songs, I will give this one a 9.
Posted by Wilcifer at 4:35 PM