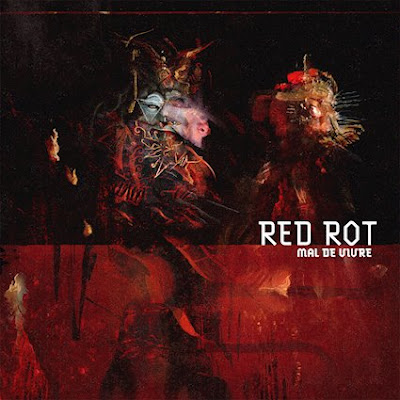 As a fan of Ephel Duath, I do not require much convincing to check out a band with two of the former members, namely the guitarist and vocalist. The first song is a dark dissonant wonderment that marries drone to progressive embellishments as the drummer who is from the Botanist uses jazz like precision to dance around the throb of the song.  "Undeceased" finds the band beginning to remind me of Meshuggah , though not following the djent path due to their explosive nature. More in how the bark of the commanding vocals sit above the chaos oozing from the riffs that undulate beneath them. There is a great deal going on that took me a couple of listens to gather my thoughts on. I like the sung vocals going into "Near Disaster" as it sets this band apart as more of an entity unto themselves than when the snarling barks come in.
I was over thirty seconds into "Everlasting Creature" before I realized this was not the previous song. It does take a more conventional metal approach in its attack. I prefer how things get darker and doomier on "After the Funeral" which includes the vocals sung more melodically. They reach an almost My Dying Bride like place with it.  To have progressive tendencies, the songwriting is not sprawling and very compact, hitting you with quick punches of hyper aggression sometimes under two minutes. The sung vocals once again keeping "Greatest Failure" from sounding like a Meshuggah tribute, though musical the riffs on this one ow more to older Morbid Angel. They grind with a machine-like grit against angular patterns. "Behind the Secret" . The more melodic tendencies of the band come out on "Conversations with the Demon". It does grind down into some heavier riffs, but the darker mood leaves breathing room for them. Not all the songs embrace the fresh air approach, with "Dualism" " a more straight-ahead metal grinder, though it's under a minute long. "Emotional Neglect " picks up where it left off it just pounds for longer.
The darker more dissonant songs are preferred. They can do this while still being full of metallic bombast, as heard on "Gruesome Memento" as the drummer is really off the chain with his fills. The second half of the alum doubles down on heaviness. They pound hard with the writhing riffs on " Dishonorably Discharged".  Three of the songs in this vein are all under two minutes. The seems to circle death metal and sludge the most as genres they sonically pull from. The vocals hard core syncopation keeping them from just being a death metal, but death metal is the broad net they would fall under. The last track is just a synth outro. I will give this album a 9, I look forward to hearing more from these guys as despite the Meshuggah like vocal approach at times, they are doing something unique. This album drops on Svart Records August 26th.
Posted by Wilcifer at 2:58 AM