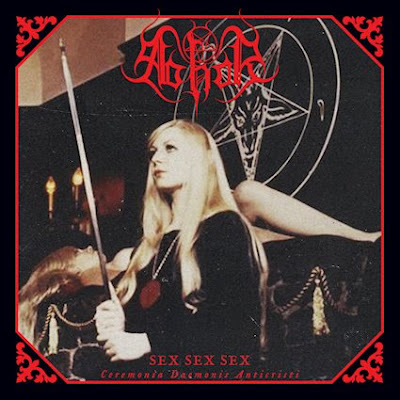 The 8th album by this Italian black metal band, finds them in a similar place that captures a horror movie feel and pays homage to occult b-movies of the 70s and 80s.The opening track, touches on a Mercyful Fate like place that also invokes a similar spirit to Acid Witch. The writing is very deliberate, and mood perfectly captured. The bulk of the blast beats are far and few between though they do show up from time to time.  There is more of a snarl to "At the Edge of the Circle". The riffs have a more deliberate and commanding feel. There is more of a death metal feel possessing" Ode to the Snake" thanks to the lower guttural vocals and the doom-tinged guitars that do speed up as the song progresses and takes you back to the time when black metal spawned off of death metal.
The creepy guitar leading into "Ritual Satanism" further creates the mood that is at the heart of this album, further setting it apart from the more blast beaten forms of modern black metal. This carries a greater sense of pervading evil. If you believe in evil if not then, it just sounds darker and more intent in its menace which is what I am going with. In conveying this the pace does pick up into a frenzied swirl on this song that is complete with blast beats, there is just more to it. There is something more sinister to the snarl. The more horror movie like elements creep into "Evil Mentor" the vocals are all over the place in their varied growls. The cover of Mystifier's "Beelzebuth" might as well be an original since I am not familiar with the first version of the song. Of all the songs to cover I am not sure what compelled them to pick something as obscure as this, because it feels like it sticks pretty close to what they already do.
Not sure what happened on Halloween of 2010, but it earned having the date turned into the song title on this album. Aside from the vocals going into a more Immortal like croak, it haunts the same chapel as the bulk of the songs on this album do. I like how the vocals are layered on "the Call" which is the last song, "Violet Coven" is just a pipe organ outro. The verses are fast, perhaps we can call it a semi-blast that builds into a master blaster. At the end of the day, they still focus on songs that puts them miles ahead of the average blast merchants. I will give this album a 9, it's easy for me to leave it on and let it play, which is a good sign in my book.
Posted by Wilcifer at 3:50 PM