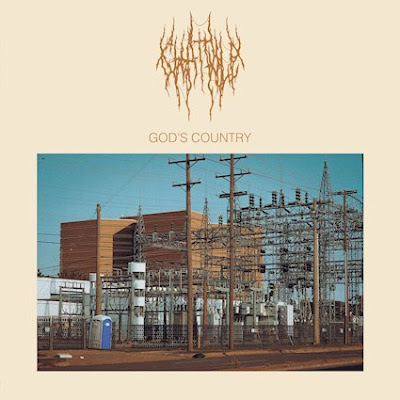 Perhaps these guys were once a grind band, but they smoked enough weeds to weird out the anger and turn it sideways. This instead turned them to the dark side.  I was so pleased about the dark vibes pervading what they do that I decided to keep listening after the first song and give this album a shot. Angular lumber of "Why" might create the mood of sludged out noise rock, but the spoken vocals that rant about homelessness, I normal do not like political or social topics that are not infused with a message of nihilism and hopelessness. But this somehow works for me due to the unhinged screamed manner they are delivered. "Pamela" is not the first song where I have detected a touch of post-punk influence. Here the guitar riff that opens the song shines a spotlight on that fact. The bleak vocals still offer a narrative that brings absurdist 90s alternative band King Missile to mind. The dissonant heaviness the guitar turns to is very nice.

"Wicked Puppet Dance" is driven by a more metallic momentum. The vocal work against the guitar with more of a roar. It is a similar approach to many of the more abrasive industrial bands of the 90s. The guitars have a more melodic feel on "Anytime" like the Pixies if they were a metal band. I am fine with lyrics about the world collapsing, just the kind of themes I gravitate to. The moments of reflection on this song give the album a wider range of dynamics even if the vocals are the most consistent part of their sound here. Nu-metal had been listed in the [press release for the sounds this band draw from and I did not hear until we got to the pounding of "Tropical Beaches Inc". But thankfully this goes down in a manner that requires minimal Addidas. "The Mask " beats you wil a similar throb though there is less of the Korn bounce to it.

"I Don't Care if I Burn" is more of as spoken word interlude than a song. They return to the kind of burly stomping grooves that propels this album with "Grimace Smoking Weed". It's a bizarre haunting ode to the purple shake monster. The narrative of the lyrics suggest Grimace is a demon that drives him to the point of wanting to kill himself. Man, weed in Oklahoma City is impressive. I will give this one a 9..5, it's a very intense and emotional journey that is heavy in perhaps not the most conventional ways.