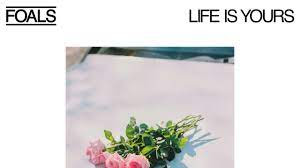 My first time giving these guys a shot, they already have six albums under their belt, btu this is their first as a trio. It's jangly and happier than what I normally listen to. While you can hear traces of a indie rock past on the first song, the second is pretty disco. It is however organic and performed with actual instruments. The fact these guys are making dance music with actual instruments goes a long way in my book, since there is not button pushing and just a bunch of lap tops on stage. I can hear some Talking Heads influence as well as Prince.  "2 AM"  is not as disco oriented, but it is upbeat and grooves.
The funk for the sake of it, finds the dynamics beginning to feel uniform by the time we get to "2001". I get it you guys are British and doing disco, lets here some more sonic range, as four songs doing a variation of the same dance is enough,  When they do not then the songs all begin to sound the same to me and I am hearing "Summer Sky" thinking it is the previous song. They do break things up with the less dancey "Flutter". It is slower and allow the vocals to find a different focal point with the melody  They remind me more of Jamiroquai. Which is well done but too happy for my tastes.  "Under the Radar" does the same thing , but in a way that works better and does not shove happy down your throat despite being pretty upbeat.
The rest of the album finds the disco formula souring as they go to the well too many times. At times it comes across like house music, though the fact it is being played by instruments rather than just idiots pushing buttons is the main redeeming trait. Though by the time it gets to "Wild Green" the electronic elements begin to take over and it rides on a familiar homogenized groove. I will give this one an 8.  It is not really my thing but is well done, despite some of the grooves overtaking the songwriting in the formula. But it you are a fan you into it just do not expect any next level shit as it very familiar.
Posted by Wilcifer at 7:52 AM