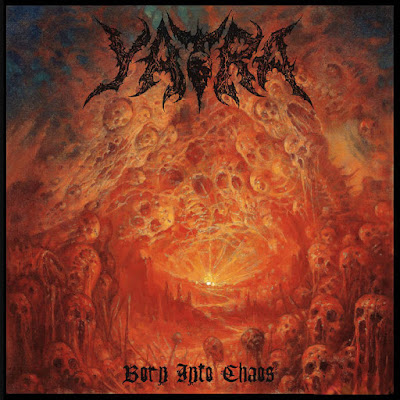 Have had enough time for my ears to stop ringing after our death metal month here to give this album a listen. Not sure, why this was not renewed then as it came out in June. They play a fast-thrashing kind of death metal that is pretty basic. The riffing is razor sharp but on the opening tracks sticks to the lowest common denominator chug. The vocals are in an angry mid-range rasp rather than the low growl you expect from death metal. They would not sound out of place on a black metal album. The guitars however keep things firmly planted in death metal. The drumming is not over the top and holds the song down with a serious pound but is not the bombastic double bass style that normally dominates death metal. The guitar riffs of the title track are a demonstration of more compelling songwriting.

Being ruled by the riff can only go so far as "Wrath of the Warmaster" finds their sound becoming perhaps too uniform, until it speeds up in a cacophonous crash midway into the song. They do slow things down to a more death doom grind all in the confines of the same song. "Terminate By the Sword" has a similar feel and dynamic to it. The verse riff is a little cooler though. There is also a more nuanced section the song breaks down into for the guitar solo. Bolt Thrower is a huge influence on these guys for sure. "Reign of Terror" starts off at a more frantic pace but finds it's groove.

When "Terrorizer" leans into the band's Slayer influence the song is better for it, but otherwise, it is more of the same tried and true brand of early 80s death metal that is the bread and butter of this album. "Omens of Fire" blasts by without hooking into my ears. The riff of "Tormentation" is more impressive. It creates a weight drone for the drums to play around.  Overall, this isa solid slab of death metal true to the old school. I will give this one an 8.5.