The Class of 92 Gwar : "America Must Be Destroyed" 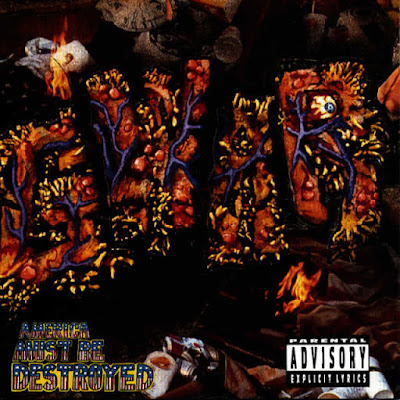 It is a daunting deed to have to follow up an album as great as "Scumdogs of the Universe". When this came out 30 years ago, I was a pretty big Gwar fan, but now that I am older and wiser, how will this album hold up over the decades.  It takes them a few to get warmed up though "Ham on the Bone" feels better to me than "Crack the Egg". The anthemic "Gor Gor" is the first song that really recaptures the magic of the previous album. This album has a tighter production than "Scumdogs" and when this album thrives it is working off a similar taunt thrash style of metal. The Alice Cooper like "Have You Seen Me" shows Brockie's pipes. It is dynamic and sticking with their outrageous theme.  "The Morality Squad" does not hit as hard as Techno Destructo's previous theme song.

The title track works off samples and a Ministry like pre-industrial thrash, The narrative is it spinning would not fly in the super PC world we live in today. "Gilded Lily" taps back into their sweet spot as songwriters being able to make catchy melodic metal songs that are over the top. Which in a genre where over the top is the bread and butter, they stepped up their game "Poor Ole Tom" is another theatrical piece set to music. Brockie is the one who brings this song together. It is slower and more deliberate than what they would normally be doing at this time. Despite the carnage on stage these guys were only helping murder hair metal in the studio. "Rock N Roll Never Felt so Good", as they parody it better than what the actual bands were doing at this time.

"Blimey" is the song I remember the least digging back into this alum. It is the fastest thrashing explosion of sound on this album. Another hair metal parody that is so good that you begin to wonder if it is in some ways intentional. Brockie once again proves he can sing when he tries. They parody Nirvana to some extent on the strum of "Pussy Planet" funny enough it is the band's current singer who handles the vocals for this song. I will give this album a 9, it is not "Scumdogs" but they were on the right track for sure.