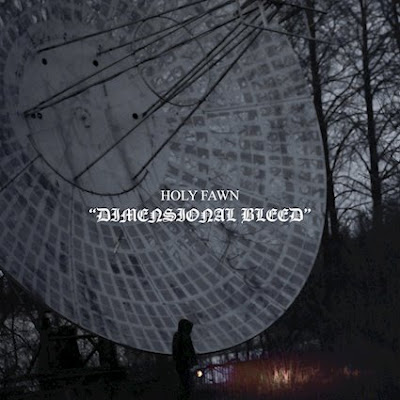 I am a fan of shoe gaze and dream pop, Holy Fawn obviously are as well.  It goes beyond this when they make fleeting attempts at going to a more Deafheaven like place on the second song and lead single. It's almost as awkward as being friends with someone who tries to fuck you. Wait I thought this was an exploration in dream land now you have screaming in the background. With that said it floats really wells sonically. In many ways the androgynous vocals, give this a sound that is what HEALTH might sound like if they decided to play shoe gaze instead of industrial. On "Lift Your Head" the drummer is ready to rock out by the end despite the more electronic feel this song flows with, the harsher vocals are buried in the background even further than on the previous song to make it a non-issue.

Guitars reappear on "Empty Vials" but hide out in the background almost like the Deftones remixing HEALTH.  It's darker as it sounds like nighttime, but not darker as in depressing or evil. I prefer depressing and evil, but willing to work with this off its sonic merits. There is more of an indie rock, if by indie rock we are talking about the Postal Service feel, to "Amaranthine". The drummer continues to impress while the introspective pondering of the vocals kept this one vulnerable even amid its floating wonderment. The atmosphere gets thicker as nighttime falls once more over the feel of this song. The vocal arrangement is pretty interesting. The surreal groove of this song works well.  The title track finds the metal creeping in again this time more apparent in the snarling chords crashing down.

The more ethereal vocals take the spotlight on "Sightless. with their gazing finding more direction while still floating largely on a cloud of heavily effected guitars, and weighty bears. The screamed vocals taking a somewhat large role, though it would still be hard to consider this a metal album. The vocals to "Void of light" drown in the ambiance of the song. that takes on a more abstract post-rock feel. The overall dynamic of the song does build into the heaviest moments of this album so far.  "True Loss" feels like a cross between Bright yes and Explosions in the Sky. The song wanders for almost three minutes before going anywhere.   The last song is almost more invested in the sound than the song until it kicks in with the dynamic shift.  Everything kinda flows with the throb on this album rather than paying a great deal of attention to sogn writing so I will give this a 9.5, an excellent album for those into atmosphere.