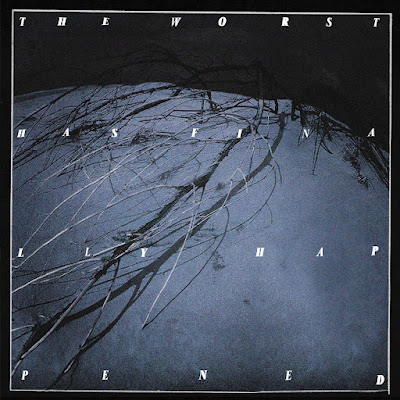 I was a big fan of this band's 2013 album; they were a few steps ahead of the industrial revival. They have expanded to a trio, so that should provide more depth of sound.  The first song is more of an intro as it drones on the same swathe of sonics for almost three minutes without the song really going anywhere, though I appreciate the mood they capture here. The second song kinda of works off the throb established in the first piece that opened the album. "Pig" finds things getting more abrasive and aggressive. They have captured some cool sounds but are they writing good songs? There is some effort made to give the vocals some breathing room to create verses. This works for what they are doing though not enough for me to think "I can't wait to hear that song again"

The vocals fight to make themselves known on "Window Sung", but it doesn't really go anywhere from there. The pace picks to a more relentless punkish hammering on "Thee Worst" , but the song does not go past the one dimensional they began to build upon. There are some impressive sounds that capture tension and darkness, but it is where they go with them that matters when it comes to song writing. Sure "Swarms" is dense and gritty, but when limited to a singular pulse, it is nor much more than noise with some pained mumbling under it. The chaos is heavy here, but is that what makes for a song that is worth listening to more than once. I have never thought "Hmm, I need to heard some more echolocation devices being fucked with".

There more organic drumming does help the overall sound, but there is little in the way of groove to provide a direction even to songs like "Thorns".  It once again finds mumbled vocals under a distorted drone. The drums start off "Golden Stairs" in a more interesting manner. The vocals do not have more melody to them but more emotion. They do not compromise their dark noisy attack, but the way the sounds are arranged gives enough structure for this to feel more like a song. I do like the slow build because at least it goes somewhere. This goes to show you do not have to conform to conventional songwriting to write a song. A burly bass line and syncopated drums lay the groundwork for " Cold Medecine" . By this point the slurred vocals are more obligatory that having much form and function. Alien groans prove the pulse for the last song. The vocals are easier to understand with this one, though just kind of fill the pace left by the crunch of the machine-like crashing beats. I will round this one down to a 7 as there are cool sounds, and i can appreciate the dark dismal moods, but there needs to be more thought put into the songwriting which was a disappointment to me as I expected more in that regard.