Sunflo'er : "All These Darlings and Now Me" 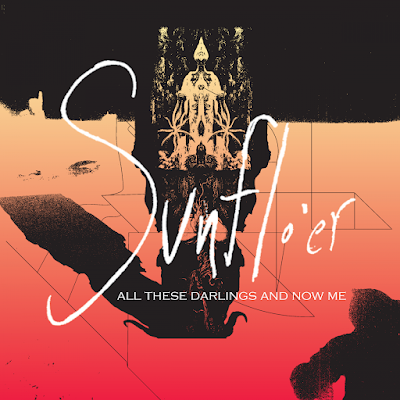 Their 2018 album "No Hell" earned the 6th place slot on the 2018 top 10 hardcore / punk albums of the year list. This time around they have a new singer which has taken things in a rowdier rock direction. He is more impressive on the first song than the second, though they have retained the kind of Refused like anger that was explosive on the previous album. Their overall sound is heavier and has more of metallic edge than the previous album.  Kvelertak without the black metal inspiration would be another sonic point of reference here and gives a better idea where the new singer's vocal stylings lean more towards. With titles like "Cyrptfucker" they have listened to a few metal albums in their day.
There is more of a palm muted tension to "Brand New Everything". The more aggressive vocal takes this time around, does give everything a more uniform feel as they are always dialed to 11. The more interesting angular side of the band does not emerge until four songs in, the guitars open up and add more atmosphere and room for the songs to breathe on "Here Ends the Roads and Days". Which is also an instrumental, so the vocals might want to give things more space instead of being in your face all the time. Thing go into a more thrashing frantic mania with the stormy tension barely lurking in the background when they get to " Big City Shotgun". This goes to show I am ok, with being aggressive and the screamed vocals, it is all in how you pull it off.  I had to listen to "7 Trumpets in Astoria". All the elements of what they do are in place, they just have to change up the attack some, over all it works well. Though at just a minute in they have twisted the riffs around so much it is overwhelming and hard to tell where you are at, but at least it is not boring.
There is more of a late 90s scream feel to "One Day You Will Control the Birds:" Lyrically this might be the most interesting song on the album. The title track finds the pace picking up and things becoming more frantic. There is no shortage of explosive on this album, so it really depends on what you are looking for here. When it ebbs down, he is still screaming so, the dynamics kind of go sideways. I will give this an 8.5, which puts it shoulder to shoulder with their previous album, but it is a different direction thanks to the new singer.
7.4
Posted by Wilcifer at 8:22 PM