Oceans of Slumber: "Starlight And Ash" 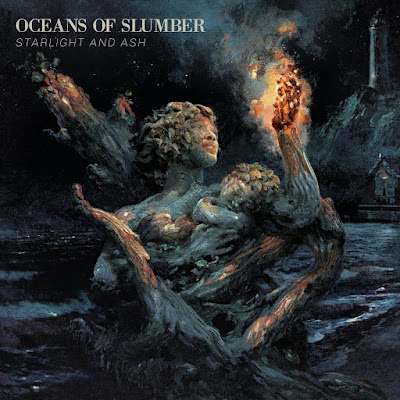 We reviewed their 2020 self -titled album. I liked it and gave it an 8.5, was not a perfect album mainly due to some of the stylistic choices. There are similar questions that need consideration this time as well, though the album sounds better and song writing is more polished.  The opening track of the has more of a pop slant to it. Think a marginally darker power ballad by Miley Cyrus or Katy Perry. Sure, she belts it out more as the song builds, but the overall feel of the song is not that heavy. It's a pretty decent pop tune though. "Hearts of Stone" works of a similar dynamic, perhaps a little more tension to it. It is stormy, but not dark. What I like about this album so far is that it sounds like Skunk Anansie. Something that is brought out even more on the blues-based ballad "the Light House".  It is like Adelle, sure her vocals sound great and have achieved a certain sound, but how does the song stand up itself. Perhaps not as much.

"Red Forest Roads' much like the bulk of the album so far is less metal than the band's previous efforts and leans more into a soulful blues pop.  It seems odd that this is being marketed as a metal album at all. This is a fact that is highlighted further on "the Hanging Tree", which reminds me a little more of the Gathering.  The slick production and spacious mix plays against the song, as a darker production streamlined brightness might have made the most of it. "Salvation" high lights a problem that keeps African American culture apart from metal, it's relationship with organized religion, which shows too much respect for on "Salvation", not just religion but Christianity, which is as non-metal in subject as anything. It is not preaching but giving it too much of a benefit of doubt to capture what metal is about and it shows in the balladic gospel tone of the song.

Just past the halfway point it hits me that some of these choices might be because they are trying harder to follow in the Pretty Reckless' footsteps. "Star Altar" is a little darker and works better than the previous song. The song builds into a little more of a punch. The piano-based instrumental does not really offer any thing song wise and is more of an interlude. This mood carries over in the ballad "Just a Day". It does build a little dynamically but generally feels more meandering. The cover of "House of the Rising Sun" is a little bit of a letdown, mostly due to the sparse arrangement. The redeem themselves on the last song, which is more brooding, though still is not metal however it is very well executed.  I'll give this album an 8.5, as well which seems the comfortable tier for their talent, entertaining and a worthwhile rock album? Yes. Among the best ? no. Comparable to their last.