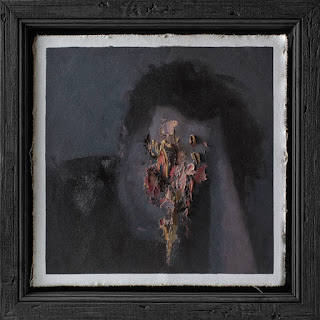 This British metal band is as feral and angry as any metal core band on their sophomore full length. They balance this tendency with a wandering post- rock juxtaposition. But when the dynamic shifts come down, they hit with all the sonic weight of a mammoth bulldozing machine. I do not recall them being as heavy before. While it's impressive in the sheer weight that they pound your ears with, "Rot" felt like an extension of the previous song rather than having a clear up identity of its own. This presents us with a uniformity of heavy. This song takes less chances than the opening track and seems more intent on the heaviness of what they do. Even then there is a punishing dissonance that has breathing room to feel every chug.
"All You Will Remember" hesitates with lingering guitar lines before committing to crashing in with the furious storm. There is even clean singing. Once again though by the time we get to "Basilisk" it sounds like it is an extension of the previous song even when it ebbs down into a softer guitar passage. aside from the post rock segues, this song feels more like a death metal band, than the sludge label they are given. Perhaps this is due to the more metallic intensity in the growls. The more chill indie rock like meander before the full roar of "Those, Years Condemned " is interesting and provided the while formulaic calm before the storm trope, a bit of time to catch your breath before they hit you again. While there is a really cool grinding riff on "Suffer Alone" they speed up into what sounds like every other band doing this shade of heavy. The rule around here is cool riffs alone does not a good song make.
There is a sonically heavier throb to "In Your Wake" that has melody in the dissonance and works better as a song. The vocals are screamed in more emotive manner than the death metal growl that is dominate through most of the album. The last song "Cracks in the Pyre" starts off with more of a post-rock feel before the distortion and growled vocals come in. The verses have more groove once the song builds momentum.  More screamed metal core like vocals also chime in. Overall, this album is pretty powerful and offers a wide range of dynamics so I will give it a 9.  It was released on Nuclear Blast.
Posted by Wilcifer at 7:44 PM