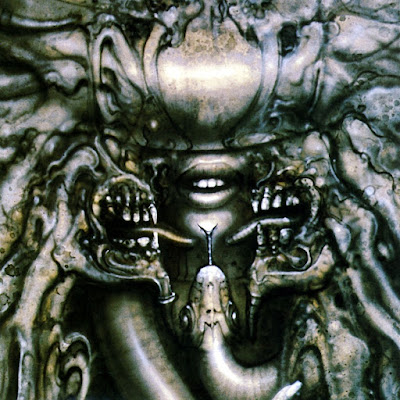 When this album came out I appreciated it was darker and more metal than "Lucifuge", but how does it stand the test of time? The opening track simmers into a doomy verse with Glenn belting it out. It picks up into a chug before culminating into a very Doors feeling spoken invocation. "Anything" summons the evil Elvis sound he is known for. The melodic guitar that starts off the song a step away from metal, but it kicks into a more driving chorus. When you listen to this era of his career its makes where he is at now sting a little more. The swing of "Bodies" sounds more like his previous album and carries more of a rockabilly feel to it. Though his power is impressive here.
I love the title track. The tender vocal at the beginning then the crush of the doomy metal riff that it builds into, the best song on the album. It showed how he was continuing to push himself as a singer. As a single in 1992 " Dirty Black Sunmer" gets the job done. It is hard enough to separate him from the grunge kids coming on the scene at the time. "Left Hand Black: was one of the songs I did not remember when I returned to this album, this is weird as it has what is perhaps the album's most metal riffs. The blues based "Heart of the Devil" is sinister under the roar of Danzig bringing the notes out from his guts. The Roy Orbison like ballad "Sistinas" is pretty fucking stunning.
"Do You Wear the Mark" is another one that is in the running for the album's heaviest song, the ripping Sabbath like riff, might secure this one as the winner of that debate. The album closes with "When the     Dying Calls: which is another doomy ripper. The melody to the chorus is pretty hooky, the drums sit back a little on this one. Overall, it is a pretty easy call that this one is a 10. It is the last classic album Danzig released though; I do like the album after this one even though he is trying to find his way in alternative music on his fourth solo outing, If you ever forget how great he once was crank this one.
Posted by Wilcifer at 6:24 PM